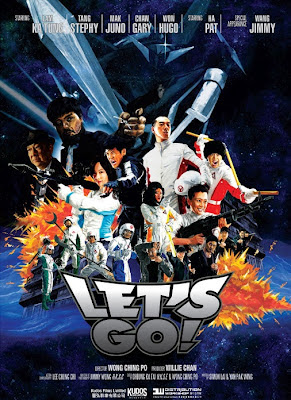 Revenge a Love Story director Wong Ching Po's latest Hong Kong action film is an odd film that goes from melodrama to revenge crimes to animated superhero fandom. Written by Simon Lai and Pak Wing Yan, the story flips and turns over wide plot holes while still be effectively entertaining even though a lot of doesn't make much sense.

Juno Mak produces and stars as Lee Siu Sheung who lives in a huge apartment building with his widowed mom. As child Siu Sheung and his dad were big fans of the transformer type of anime called Space Emperor God Sigma. They would watch the series on TV together, sing the theme song and mom would help dad raise their child in the air for the climatic hero pose. One day his dad died while being a hero and Siu Sheung who never watched cartoons since that day still tries to stay on the side of justice. His loser friend Big Bird (Wen Chao) doesn't want to give up his fantasy of Siu Sheung being the captain of their Earth Guards a sort of justice squad that doesn't really do any crime fighting. But Big Bird has a book he's drawn with their goals and he's even designed a uniform. Since the loss of his father Siu Sheung has devoted developing his fighting skills which is brought to the attention of Shing (Gordon Lam) who hires him as a security guard for the Matsumoto syndicate. The first lesson he earns there is never fight your co-workers. Siu Sheung is assigned to be the body guard of the boss's daughter who he early met and helped out when she was caught shoplifting. Annie (Stephy Tang) quickly becomes friends with Siu Sheung's mother and Big Bird. Mean while Shing decides to pull a coup on Hon Yu (Jimmy Wang Yu) and a bloody battle begins. Siu Sheung is forced to not only protect Annie but his friends and community.

The craziness in the last third of the movie seems to come out of left field. There doesn't seems to be a sense of time taking place, events could have occurred over weeks, hours or days. And Big Bird's attempts to exact revenge on Shing was unexpected but serves to propel the plot for Siu Sheung getting some super powers. Even when the viewer is wading through WTF moments, the action and silliness keep you watching just to see what comes next. 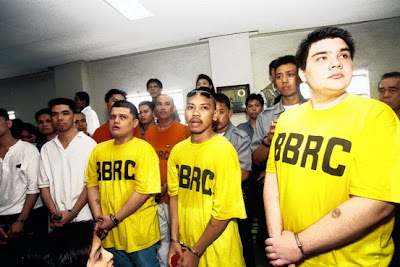 In July of 1997 two sisters, Marijoy and Jacqueline Chiong disappeared on the island of Cebu in the Philippines. Two days later the badly beaten, blindfolded and handcuffed body of Marijoy was found in a ravine. A crime like this has never happened in this town, and there was enormous pressure to print the perpetrator to justice. A few weeks later Paco Larranga was arrested for the crime with six other young men despite the fact that Paco was in Manila taking mid term exams at the time. Director Michael Collins and producer Marty Syjuco (a distant relative of the Larranga family) examine with a riveting expose on the miscarriage of justice that ruined a young man's life from the local police to the Supreme Court of the Philippines.

The media circus that exploded at the time provided a massive amount of newscasts, tabloids and TV interviews from that time that is woven along with the filmmakers interviews with the family, journalists and others involved in the case. The step by step discrepancies from how Paco's name came to be even considered as a suspect, the fact that Marijoy Chiong's father was supposed to testify against drug lord Peter Lim, and the policemen involved worked as Lim's body guards. The mother Thelma Chiong's sister was a long time secretary to President Estrada who put the pressure on to charge someone and close the case.

The Larrange family was painted by the media as being rich and privileged. The facts that there were forty two affidavits testifying that Paco was in Manila at the time the crime occurred, along with pictures of him partying with his friends were never taken in consideration. Paco didn't even know all the young men who were also charged with him. Weeks went by after they were arrested but no solid evidence was ever produced. Until suddenly an ex convict from America shows up and confesses to the crime and everyone's involvement although there is some evidence that he was tortured by cops before hand. It was also later brought up that the body found was never properly identified as Marijoy.

When the trial was being held, before the defense could present their case, the prosecution testimony included a televised reenactment of the crime using actors. In the Philippines only the judge can hear a case as they do not use the jury system. Key witnesses were not allowed to testify and the defense lawyers were jailed for contempt and substitute lawyers were assigned who didn't do anything. Even after the men were sentenced to 2 life terms, the appeal to the Philippine Supreme Court overturned the sentencing and gave them the death penalty.

Paco's case eventually through the help of relatives in Spain was brought to life and the attention of the United Nations. It wasn't until President Estrada was charged with corruption that Vice President Arroyo came into power and abolished the death penalty. Resolution of his case is still forthcoming. There are websites and a grass roots support system to free Paco. After this compelling documentary you will want to join that campaign. 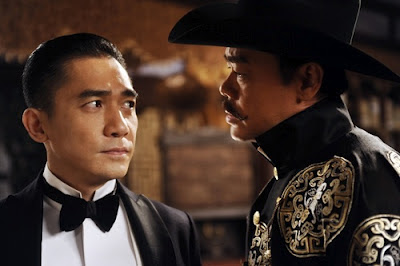 Triple Tap director Derek Yee with a story by Tin Nam Chun and Tung Shing Yee creates this fanciful world of early century China with warring warlords and fantastic magicians. The beginning sequence is a bit confusing with farmers being given a choice to join an army by distracting their attention with a magic act that ends with a officer being beheaded. Or was he really?

Hsien (Tony Leung Chiu-Wai) accepts a challenge from a magician offering money to anyone who can do his trick. Hsien does it easily and then some but turns down the cash. He's in town with some revolutionary types who want to take down the local warlord Bully Lei (Lau Ching-Wan). Bully has six wives, but his 7th circus acrobat Liu Yin (Zhou Xun) he never legally wed and she refuses Bully's attentions until he promises to find her father Liu Wan-Yao (Paul Chun). Yin has some other issues like her mysteriously missing fiancé who unsurprisingly turns out to be Hsien. Then there's the Japanese filmmakers bringing the art of movies to China, the other warlords who accept Bully as their leader when he brings tanks to the table that trumps everyone else's stash, and the group that wants Bully to declare his support of the Emperor. Bully who is known as the rotten warlord is also illiterate although he has perfect recall.

Bully is seen as a hound dog around pretty women, sweet with his wives, sincere in his desire to woo number 7, and cruel like when he shoots the director for shooting a bath scene with one of his wives. While Hsien is the smoldering cool magician whose magic amazes all, but no longer impresses his former girlfriend. It's a bit confusing at times when the bricks begin to fall into place. In the meantime, there's lots of fun magic, delightful sparing of Bully and Hsien over Yin. The bantering between Lau and Leung was fun cat and mouse play and wish there was more. There's a search for a special 7 Wonders Scroll that offers mind control and the ability to conger up an army. The underling theme going on is about magic and cinema not being real and magic only works if you are willing to believe. It's hard to decide what to believe in this story as things get complicated, but it's all in fun and games although it could have been better.
(Reviews by reesa)

Posted by Dallas Movie Screenings at 12:47 AM