From 1960 to 1975 Cambodian cinema was thriving. More than 400 productions were shown on the 30 theater houses in Phnom Penh during it's heyday. With only about 7-8 producers and a handful of actors, the stories told were mostly melodramas or supernatural B thrillers. The film's director Davy Chou is the Cambodian French grandson of Vann Chann one of the most famous producers at the time. Today only 30 old movies in poor quality VHS and VCD formats remain.

Sohong Stehlin the daughter of Vann Chan and aunt of Chou recalls her father's first movie in 1964. When she returned in 1979 there was only about 13-15 pictures left of his 11 years of non stop film making. Another producer Yvon Hem stands at the location of his studio Bird of Paradise that is nothing but rumble and metal building frames. He recalls when Marcel Camus made a film in Cambodia and his sister was selected as a lead. Hem would drive her to the set, and Camus gave him a job too. After the movie was completed, his sister wanted to continue acting so they decided to do productions on their own naming the studio after Camus's movie. Ly Bum Yim's first movie was called Safe Virgin which he didn't think was all that great, but the audience loved it. Earlier he had found a camera on a trip to Hong Kong and brought it back with 40 reels. Like all of these producers they learned on the fly with little to no help or guidance. Creating special effects for ghosts appearing and disappearing. Director Ly You Sreang made a movie called The Sacred Pond in which his actor had to be nude with only a lotus leaf partly because he knew it would be popular with the ladies. There's also an interview with the most famous of the leading ladies of the time, Dy Saveth still looking amazing giving a moving account of the immortality of Cambodian cinema. Her wall is covered in old pictures of the time as a reminder of what was.

The King of Cambodia had a film festival in 1969 to encourage it's beginning cinema industry. The Khmer Rouge considered it decadent and many actors and producers were killed in the genocide that followed. The movie lingers too long on the old wreckage of the movie theaters that are now restaurants, recreation centers, makeshift housing or karaoke bars. The directors still have the light and enthusiasm for their movies when recalling their stories. There's also the heart break of what they had to endure and all that they lost. The movies may be lost but the all the movies included music particularly a duet by the leads at the end of the movie. Remarkably the music still remains popular and in the collective memory of those who survived. 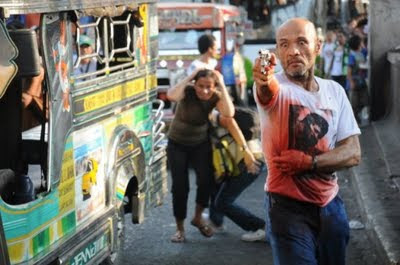 The EDSA-Pasay Rotonda, situated in the middle of EDSA and Taft are two of the busiest streets in Manila. You can feel the heat of the day on the crowded roadways, the grills of the food vendors, and the intense traffic that fills one with sensory overload. Life is in full thrall as everyone is going about their business. This is the location for Lawrence Fajardo debut feature film with screenwriter John Bedi. The lives of the characters involved in the movie are only touched on as their stories are just another vibration that keeps the streets alive.

There's the father and son talking about a basketball scholarship, the taxi driver annoyed with a gay talent agent customer, a driver who works for his sister, a mom and daughter food vendor, a guy with a prositute who gets a little more than he expected, a very pregnant store keeper, a cop threatening a woman with buring down some squatters housing, and a couple hustlers playing poorman pool with bottle caps with a gunrunning thug. Amist the hustle and flow of the pedestrians, cars, buses, and noise and everyone going about their daily routine. Throw a random act of violence in the mix and chaos ensues.

The journey to the enivitable is paced with a percise rhythm that is enhanced by the city sound scape punctuated by the staccato rhythm of kid rappers that are like a Greek chorus. It's like the camera is eavesdropping on these people as we only hear snippets of conversations without set up or point of reference. It's the same kind of curiousty one feels when faced with a mass of people and wondering what brought that person to that point in time. And that bad luck monent that could crash down and stop their world in it's track. It's not surprising to see humanity take advantage of those hard moments reminding us that like it or not life goes on for the living. We rubberneck it like a traffic accident, we are amsued that the witnesses use their moment of glory on camera to play their own agenda. It's a somewhat cynical glipse of our human condition after all we are only a temporary blib.
(Reviews by reesa)

Posted by Dallas Movie Screenings at 9:01 AM