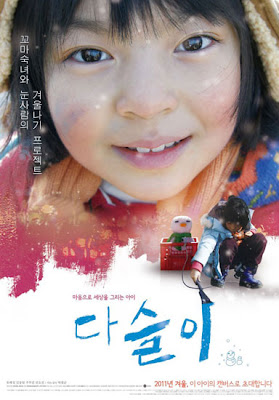 Written and directed by Park Chul soon, Loveable covers an unusual subject and an amazing first time performance by 11 year old Yoo Hae Jeong as the autistic young girl who paints graffiti all over her small seaside town. Da Seul lives with her grandmother and her uncle who have their own jobs and are not totally prepared to handle her.

Da Seul probably is afflicted by savant syndrome. Her paintings are beautiful on the walls and benches, and anywhere else she attacks with her colored chalk. The villagers don't particularly like it and Da Seul's relatives are often stuck with cleaning up her mess. The grandmother works for the fishery, the uncle works at a night club. Da Seul is left to her own devices all day long, She wanders looking at the world in her own unique way. Her grandmother feeds her when the child cooperates. Inside the house she is glued to the TV watching a video about a little girl and her snowman who fly around. Or she is sound asleep while her grandmother and uncle play cards and drink soju. It's difficult for them as though they have grown accustomed to Da Seul's limitations it's still hard with and angry frustrated Da Seul who will attack and bite a person.

During a snow Da Seul makes a snowman and carries it around town in a milk crate. It goes everywhere with her. She tries to keep it from melting. Her uncle brings home a used freezer for her to keep it in. On top of rooftops, the light house, Da Seul with her binoculars one days sees the view of her village then goes home to get a bucket of paint. Soon she is painting the roofs of buildings it seems like random messes compared to her usual drawing. One neighbors insists that the grandmother but her in a mental hospital which made the grandmother smack the neighbor over the head. It's almost impossible to love a child like Da Seul who shuns human contact and is not verbally coherent. The film is at times heart wrenching but also it shows a beautiful mind. 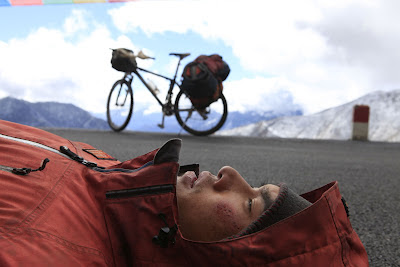 Kora is what they call the pilgrimage in Tibet on the endlessly winding road of more than 1100 miles tracking over eight different mountains reaching impossible altitudes. This is the journey of Zhang Shuhao who decides to complete the trip that killed his brother. Wishing to fulfill his brother's final wish and armed with his brother's diary, Zhang a novice bicycler starts out in Lijiang in the Yunnan region of China to the sacred Tibetan capital of Lhasa. It is the first director's project for producer Du Jiayi based on the novel Zhang Shaun by Xie Wanglin which is based on a true story.

Just arriving at the starting point of the long trip the altitude is already difficult to breathe. He's given some pills by a cab driver who also offers to sell him some fake ID to get through the checkpoints. He gets ripped off when he meets an experienced cycler on the road who is also making the journey.
Wisely Zhang decides to partner with Li Xiaochuan who has been doing the trip for three years. Obviously the stunning part of this movie is the amazing and spectacular scenery. The climbs, the switchbacks, and the often unpaved roads they have to travel is daunting even for an experienced rider. Zhang begins to almost give up and is patiently urged on. They people they meet on their journey is like a travel show that allows us a look at a different culture that live in some of the worlds most remote areas. Tragedy strikes about half way through, and Zhang must make the remaining trek on this own through the winter.

It's a mesmerizing tale of endurance and the need Zhang's need to complete it in honor of his brother and to work out the grief of losing him. It takes fortitude to take on such a daunting experience and not give up. But as Chaun tells him, that once you get there then you have to go back. 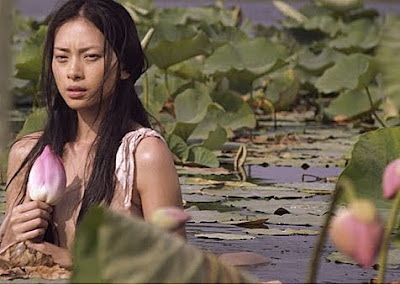 Pearls of the Far East

Vietnamese director Cuong Ngo managed to get the caliber of talented actors to his debut feature film on the strength of a short film that won some awards on the festival circuit. For it's Texas premiere of Pears of the Far East it was awarded the Jury Prize for Best Cinematography by Ngo's former York U classmate Mikhail Petrenko. Taking six months to film the lush, beautiful scenes and rhythm of the film gives off a high budget aura. When funds got low Ngo edited the film in his mother's basement. Based on the shorts stories of Minh Ngoc Nguyen the seven short stories weaves tales of the feminine experience of love. The dreamy musical score was created by Alexina Louie and Alex Pauk, two leading lights of the Canadian new music scene.
Each chapter has a unique voice that melts into the next without ease that is sometimes hard to tell when it changed without the chapter titles. It begins with a young girl's first love from which she is separated, a young woman who must deliver the news of a woman's son was lost during an excavation but is mistaken for his fiancé, two beautiful young people stranded together on an island since they were children, a handsome young man meets a beautiful woman for night of bliss but she may have been a goddess, an older woman who was almost married 7 times contemplates her decisions, another older woman whose cheating husband gives her the strength to find love in a young man's arms, and an aging actress living alone in a large estate thinking about time.
It's a slow and meandering film that captivates the eye and insinuates it's self into your senses. It's the kind of movie that stays with you after you leave the theater without you realizing it. It's an unforgettable tapestry of characters in a universal experience. 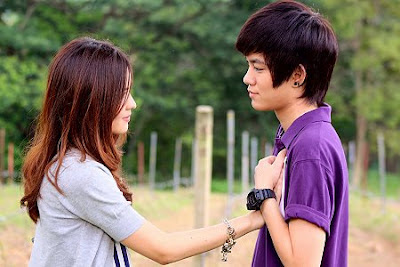 Yes or No (Pu Chai Lulla)

Directed by Sarasawadee Wongsompetch Yes and No is a refreshing romantic comedy about a couple of new dorm mates. It seems to be a first film giving a lead role to a butch looking young woman.

Pie (Sucharat Manaying) is Pie a sweet and girly girl who is excited about being in anew dorm and looks forward to welcoming her new roommate that she writes a note on their bathroom mirror to their new friendship. She is taken aback when she discovers someone touching her suitcase that she give that person a swift kick until she realized that boy is actually a girl and her new roommate Kim (Supanart Jittaleela). With her short haircut, boy clothes and posture, Kim is very handsome. But Pie has taken on her mother's prejudices of not accepting anything not "normal" calls her a tomboy (butch lesbian).

Kim gets the attention of Jane who lives across the hall when she lends her a handkerchief, so Jane decides she's in love with Kim. Pie is so put off by the whole situation she puts a line of tape on the floor to separate their room. Kim is sweet and not really boy like when you get to know her tries to befriend Pie with food. Later Kim gets lost on campus looking for her aunt's cafe and Pie takes her there. After cake and listening to some music Pie begins to accept Kim as a friend.

This story is not too complicated with the usual misunderstanding and the joy of discovering a deeper relationship. There's also Pie's bland boy friend, her unyielding mother, Kim's funny accepting father and brothers, Jane's roommate Nerd who steals her scenes, and their wise cracking effeminate friend, But it also shines a light on the politics of love and that there is no way to control who is in your heart. Sweet, and enduring, it will bring tears to even the grumpiest person. It's hard to imagine if this movie was made in the states. No...don't want to try.
(Reviews by reesa)