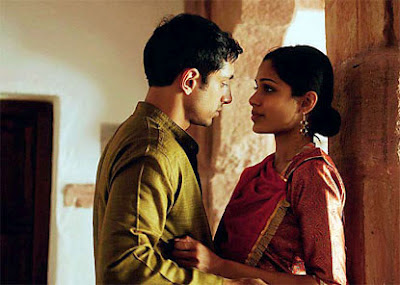 Eclectic director Michael Winterbottom who has done such diverse works as The Trip, A Mighty Heart, Wonderland and Jude also wrote the script for this modern adaptation of Thomas Hardy's novel Tess of the d'Ubervilles. Beautifully filmed in Jaipur and Mumbai, India, the slow pacing meanders over the landscape radiating the heat of the environment amidst the hustle of the dense bustling population of it's inhabitants.

Jay Singh (Riz Ahmed) an English/Indian business man is touring the rural areas with his friends when he encounters Trishna (Freida Pinto) working as a server at a hotel. He's immediately attracted to the innocent 19 year old beauty and with the amused encouragement of this mates approaches her hoping to see her again. Later, Trishna is in a accident that destroys her father's rented Jeep tha critically injures her father. Jay offers Trishna a job at his father's hotel. The money offered is enough to support her family while her father recovers. Jay's attention to Trishna is sometimes sweet and uncomfortable. Trishna is an uneducated country girl who is being seduced by a spoiled rich kid who doesn't speak Hindi. She is attracted to his worldliness he's attracted to Frieda Pinto. Eventually they consummate the slow sexual tension that is building over the course of her waitress training, but afterwards Trishna feels shame and goes back home to even more shame when she discovers she's pregnant.

Jay finds her again and takes her with him to Mumbai where he wants to become a producer of Bollywood videos. They live together in a luxury condo, shopping, having dinner with friends, walking the beach, making love, and Trishna takes dance classes. Her world revolves around Jay until Jay's father gets sick and he goes back to England. The heady few months comes crashing down when he doesn't come back and for a brief moment it looks like she may find a way to survive on her own with her dance friends. Only Jay comes back wanting her to return to the hotel business while working once more as a hotel server. The brutal third act is the melodramatic spiral that is somewhat shocking and major downer.

One can understand Trishna's jumping from her poor home, unyielding father, and her sense of responsibility to support her family to go off with the rich young man hoping for a better life. Jay comes off like a laid back nice guy who truly likes the hard working agreeable young woman. So when their doomed fate begins to loom it sort of comes from left field if you are not familiar with the source material. While the circumstances may have worked in Hardy's time, it's hard to imagine that Trishna would not feel like there's alternatives given the friends and family she has in place. Pinto while absolutely stunning as Trishna doesn't give the woman much depth, more like a blank slate considering the number of crisis that befall her. It's only in her last cornered moments where she actually breathes some life into her character. The film works wonderfully as a travelogue, but the story will feel dated.
(Review by reesa)

Posted by Dallas Movie Screenings at 12:47 AM