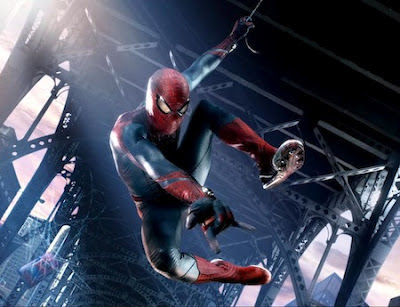 The Sam Rami/Tobey Maguire versions of the web shooting superhero Peter Parker, aka Spiderman were alright. Fun, over the top and often time messy jumbled FX heavy excursions. Enter Mac Webb who directed the enchanting 500 Days of Summer at the helm of the action big name box office contender and what do you get? A superhero story with a lot of heart, angst, and a more improved reboot. The story by James Vanderbilt, Alvin Sargent and Steve Kloves basically covers the same origins of Spidey but with variations of the theme. This time it's focus is on Peter's need to have closure to the disappearance and death of his parents. What he finds of course changes his life forever.

Andrew Garfield of The Social Network steps into the red and blue masked leotard this time around. He brings a fresh faced innocence to the nerdy high school student photographer who gets bullied, but stands up for others in the same situation. His innate sense of right and wrong catches the eye of the beautiful round eyed Gwen (Emma Stone) who is also the daughter of the police Captain Stacy (Denis Leary). Their awkward teenage interactions while testing their waters of attraction is sweet and touching. The journey that takes Peter to the find his father's past is fueled by the shooting of his beloved Uncle Ben (Martin Sheen) while Ben's phone voice message to Peter and Aunt Meg (Sally Field) are left with the pearls of wisdom that must guide the confused young man.

The boy becomes spider part of the film is fun, exciting, filled with the unexpected and handled with just the right amount of tongue in cheek. It's explained that Peter goes to a science high school which is why he can figure out his father's unfinished equation. This helps his father's friend at Oscorp Curt Connors (Rhys Ifans) who was working on an experiment to regenerate missing limbs on humans as Connors is missing his arm. There's also hints of a mysterious Osborne who is underwriting Connors work for whatever nefarious reasons that will probably be in the sequel. Hopefully they will clear up what happened to Peter's parents too.

The CGI and FX are handled well within tolerance levels especially on the 3D IMAX screen with a lot of big smile “wow” moments. It's worth the extra $$ for the special glasses. The long running time will go by quickly. As with all Spiderman movies the web slinging here has an almost POV perspective that helps the audience connect to Peter's experience. Garfield and Stone's chemistry is palatable on screen with the gorgeous Emma Stone and Garfield's small wiry physique. The lizard monster is rendered more sympathetic by Ifans and thankfully not like a cartoon Godzilla. The movements and fights scenes are EPIC. We have been really fortunate this year with some great genre films like The Avengers and this one is another thank you very much. Don't forget to stay through the main credits for a teaser scene after the movie ends.
(Review by reesa)

Email ThisBlogThis!Share to TwitterShare to FacebookShare to Pinterest
Labels: The Amazing Spiderman review