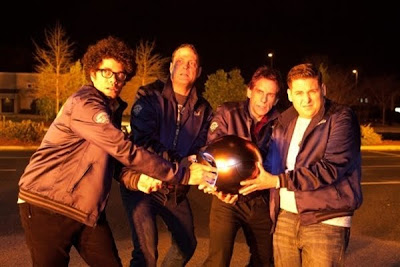 The new comedy directed by Akiva Schaffer (Saturday Night Live) gained some early notoriety when it had to change it's title from The Neighborhood Watch to disassociate itself from the shooting of Trayvon Martin by a neighborhood watch member. Written by Jared Stern, Seth Rogen and Evan Goldberg it follows four suburban guys who want to protect their town from aliens.

Ben Stiller plays Evan, a manager of Costco who creates clubs to mingle with the diversified denizens of his home down of Glencoe, Ohio. When the security guard at his store is brutally killed, he decides to form a Neighborhood Watch group to stamp out murders. The only ones showing up is Bob (Vince Vaughn) a construction worker raising a teen daughter alone while his wife works out of town. Franklin (Jonah Hill) is a high school drop out who was rejected from joining the police department because according to Franklin he was too awesome. And Jarmarcus (Richard Ayoade, writer and director of Submarine) who wants to join the watch so he can be seduced by some scared Asian chick. Evan, straight laced and ridged has a hard time dealing with the group because they would prefer hanging out and drinking beer at Bob's man cave. On their first night out they get egged by some local teens. They capture one and they the guys feel united in their team and their watch jackets. Later they find an orb what shoots a powerful weapon, then later they kill an alien which they bring back to the man cave for photo ops. They can't tell the police about this because Sgt. Bressman (Will Forte) thinks they are useless and suspects Evan of being the killer.

Ben Stiller as the uptight husband of Abby (Rosemarie DeWitt) is his usual awkward character. Vince Vaughn is his usual motor mouthed character who obsessed with keeping tabs on this teen daughter. Jonah Hill is fairly funny as the over confident militant who lives with his mom. It's Richard Ayoade who steals the movie. Look for Billy Crudup as the creepy neighbor who has something going on in his basement to bring some laughs.

The immediate violence of the some of the scenes may be a little harsh for some tastes, but it's the potty mouthed humor that's more directed to arrested developed adults is the most off putting. It's gotten to the point where it's not surprising or funny to hear the characters go on about the quality of the alien green goo in a bit that just goes on longer than necessary. In fact the humor is not children friendly, so parents should be strongly advised to leave the kids at home.
(Review by reesa)

Posted by Dallas Movie Screenings at 12:52 AM

Email ThisBlogThis!Share to TwitterShare to FacebookShare to Pinterest
Labels: The Watch