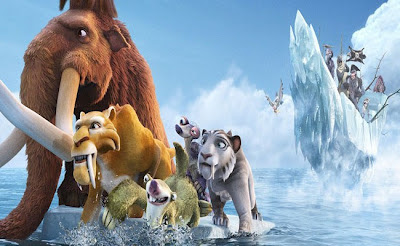 The fourth in the series about creatures who supposedly lived during the Ice Age is back with the characters a little bit older dealing with family issues. Directed by Steve Martino (Horton Hears a Who) and Mike Thurmeier (Ice Age: Dawn of the Dinosaurs) teamed up with writers Michael Berg (Ice Age) and Jason Fuchs in telling the continuing adventures of the woolly mammoth Manny and his friends as the continents of early earth break apart and form the world we know today. It's the first sequel not be be directed by Carlos Saldanha and the second Ice Age movie to be filmed in Digital 3D.

If kids learn anything from movies they will discover the saber tooth squirrel Scrat caused the crack in the world when he attempts to bury his elusive acorn. The massive upheaval leads to earthquakes and a shifting land mass that causes Manny (Ray Ramano), his wife Ellie (Quenn Latifah) and the rest of the inhabitants of their section of the world to find a somewhere that's not being edged into the ocean. Their typical teenage daughter Peaches (Keke Palmer) has been hanging with some other juvenile mammoths that she loses track of her best friend Louis (Josh Gad) who is a molehog. Manny, Diego (Denis Leary) a saber tooth tiger, Sid the sloth (John Leguizamo) and Sid's addled grandmother Granny (Wanda Sykes) get stuck on an iceberg that carries them far from the rest of the herds. While Ellie and Peaches try to move everyone to the land bridge for safety her father is dealing with pirates like Captain Gutt an ape voiced by Peter Dinklage. Among his crew is Jennifer Lobez as saber tooth cat Shira who becomes a love interest for Diego.

Inventive and creative with numerous popular actors voicing the various rolls like Simon Pegg, Nick Frost, Seann William Scott, Nicki Minaj, Aziz Ansari, Joy Behar, Patrick Stewart, and Alan Tudyk. It's a challenge and a distraction for the parents trying to guess the celebrities. The antics brought on by the characters are fun for whole family types of amusements. The only thing that may scare the little ones is their trip through the sea of Sirens. Outside of obvious liberties with scientific records regarding the creatures living in this era the on going theme is universal cooperation among species in mutual multiculturalism in order to survive. The journey to get back to each other's families teaches some valuable lessons of appreciate, tolerance and teamwork. Those kind of lessons no matter what age or mode of media is worth taking your kid to the movies. The best part of the Ice Age experience was the short film just before the movie called The Longest Daycare in which Maggie Simpson must stand up for what's right. It's a perfect little diddy that had no dialogue. Scrat's trials with the acorn also has no dialogue and you can relay a lot more information and laughs than all the talking in this world.
(Review by reesa)

Posted by Dallas Movie Screenings at 1:01 AM