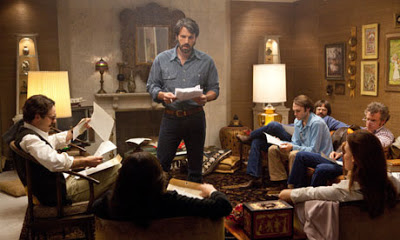 Not many people remember that Jimmy Carter was president. Nor do people remember the 1979 Iran hostage crisis during the Carter era when 52 people at the American embassy were held for 444 days. The records were sealed regarding the 6 American embassy workers who fled out the back door during the takeover and hid at the Canadian ambassador's home. Their escape from Iran had come to be known as the “Canadian Caper”. The real story came from the declassified records of CIA specialist Tony Mendez. Chris Terrio wrote the the screenplay based on Joshua Bearman's 2007 Wired article “How the CIA Used a Fake Sci-Fi Flick to Rescue Americans in Tehran”. Produced by George Clooney, Grant Heslove and David Klawans it is directed by Ben Affleck who also stars as Tony Mendez.

The movie begins by giving a set up of why the Iranian Revolution. It started with a coup in the 1950's and the installation with the CIA help of the Shah Mohammad Reza Pahlavi as an absolute monarch. His reign was supported by the US, but his policies in Iran caused the people to revolt and bring the return of Ayatollah Ruhollah Khomeini as it's leader. The CIA and the State Department discover the information of the 6 who got away from the embassy. The Iranian are unaware of the missing people but time is short as the shredded documents are being puzzled together by kids pressed to do the job. Several scenarios are suggested to get them out which are shot down by Tony who uses his cover name Kevin. He offers them the best of the worst ideas by making them the staff of a Canadian movie project checking out locations in the Middle East. Using his Hollywood connections of and Oscar winning makeup artist John Chambers (John Goodman) who in turn drags in producer Lester Siegel (Alan Arkin). Lester is determined to doing a fake movie that will be a hit. Along the way they coin the phrase "Argo f**k you".

Affleck plays Tony/Kevin completely poker faced. He's strong, confident and wary. He's balanced by the jovial Goodman and Arkin who play the cynical Hollywood cheese with relish as they build up the buzz to the film, have a table reading with costumes and cocktails, take out full page ads and Variety write ups. They even have a production office all financed by the CIA. Tony then has to convince the hiding 6 who have grown paranoid and scared to learn new identities, the script called Argo, and find the courage to walk out the door and get through the check points at the airport. The Canadian “guests” in hiding (Tate Donovan, Clea DuVall, Kerry Bishe, Rory Cochrane, Scoot McNairy and Christopher Denham) are living in terror watching the news on TV and from the windows surrounding the ambassador's house. They are too frightened to be motivated at first, but the Ambassador (Victor Garber) is told by the Canadian government to shut down the embassy.

The opening sequence really grabs one's attention and the last act of the escape is taut and exciting. The based on true story is beefed up for dramatic effect, but doesn't take away from the fact that the basic stuff really happened. It would have been nice to have more emotional heart to the film, like caring about the people involved outside of their bored and frustrated situation. But this is flag waving patriotism feel good ending and a nice reminder of history that we should never forget.
(Review by reesa)