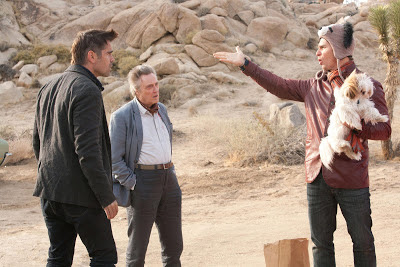 Director/writer Martin McDonagh collaborated successfully with Colin Farrell in In Bruges, a very darkly humorous adventure of a couple of hit men. The new film McDonagh wrote with Graham Broadbent and Peter Czernin had it's world premiere at the 2012 Toronto Film Festival. Employing some of the best of the quirky bad boys in film today, the combination is both violent and funny.

Colin Farrell is Marty an alcoholic screenwriter who is trying to complete his script but hitting a writer's block and drinking to oblivion doesn't seem to be much help. His best friend Billy (Sam Rockwell) an unemployed actor keeps encouraging Marty to stop drinking. Billy works with Hans (Christopher Walken) in lost dog scheme, where they steal someone's pet then turn it in for the award. They unfortunately end up stealing Bonny the Shih Tzu of the psycho Charlie (Woody Harrelson). Charlie and his gang will do anything to retrieve the beloved dog. Meanwhile there's a serial killer on the loose in the same neighborhood who targets bad guys and leaves a Jack playing card as his signature on his victims.

The working title of Marty's screenplay is called Seven Psychopaths. He just can't seem to come up with an idea. Billy tells him a grizzly bar tale about this guy who murdered this Amish farmers daughter. To further help his friend, Billy puts an ad in the free paper for psychopaths to be interviewed. One of them is Zachariah Rigby (Tom Waits) who carries a rabbit and his bizarre story of a killing spree with a woman partner.

Woody Harrelson's role was previously offered to Mickey Rourke who dropped out after disagreements with the director. Woody's Charlie is sinister, but a sensitive dog lover when it comes to his Bonny. Even his girlfriend who is having an affair with Billy doesn't come close. Look for Abbie Cornish as Kaya, Marty's girlfriend without much to do and Gabourey Sidibe as Sharice who lost Bonny in the first place. Linda Bright Clay is Han's sick wife seems the only sane one in the movie. Harry Dean Stanton shows up briefly too.

The movie at times seems all over the place but somehow all of this comes together with Charlie's deadly search for the dog. Hans, Billy and Marty end up hiding in the desert and end up collaborating on the script. Hans takes it very seriously. He tells Marty he likes it, it's got layers. Hans then ingests peyote and reciting his ideas on a voice recorder. There's some great discussions as Marty doesn't want the typical serial killer type of story. He's looking for something more life affirming. McDonagh's last act of the movie does manage to deliver something life affirming after all the unexpected and bloody violence.
(Review by reesa)