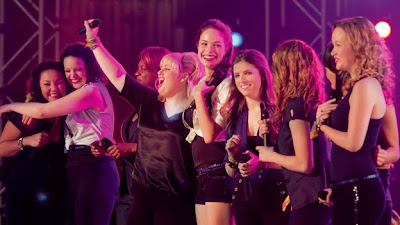 The TV show Glee has spawned reality shows of group choirs which don't live up to expectations so they fail miserably whetting the appetite of viewers hoping for something more musically exciting. Real live people don't sound as perfect as these professionals with their auto tuned voice tracks and the full orchestra that mysteriously appears behind them. Singing acapella is an even a bigger challenge since one has to sing without the live instrumental background. Director Jason Moore (Dawson's Creek, Everwood) and screenwriter Kay Cannon (30 Rock) loosely based this film on a novel of the same name by Mickey Rapkin.

The story follows Becca (Anna Kendrick) as the “indie chick” who wants to go to LA to become a DJ. Her dad who works at the college disapproves but promises her that if she would give school a honest chance by joining some groups and making friends he will relent after a month. Becca is quickly recruited by “The Bellas” an all female acapella group who missed winning the national competition because their leader had an accident during the performance. There are several acapella groups on campus with the all male choir the “Treble Makers”, the national champions and the The Bella's rivals. The Bellas want only to audition the prettiest singers, but the lack of applicants forces them to integrate their group with the likes of Fat Amy (Rebel Wilson) who named herself with that handle because people call her that behind her back anyway. Aubrey (Anna Camp) runs the group with a control freak relish assisted by Chloe (Brittany Snow) who discovers Becca singing talent in the shower. Aubrey has a hard time trying to make the group into her ideal as the new members don't exactly fit her model performers dressed like airline stewardess complete with neck scarfs. The new group includes the black lesbian power vocalist Cynthia Rose (Ester Dean), the sexually promiscuous Stacie (Alexis Knapp), and the mute Lilly (Hana Mae Lee) the token Asian. The members of the group are given one hard and fast rule. They cannot date any of the Treble Makers.

This makes it difficult for Becca who is fighting the flirtatious Treble Maker Jesse (Skylar Astin) who also works with her at the school radio station. Their contentious relationship is the romantic drama of the movie. Most of the amusing conflict comes from the unbending Aubrey, her tunning whistle and her boring/safe musical selections for their competition program. The commentators of the Nationals (Elizabeth Banks and John Michael Higgins) remark how the Bellas music hits the snooze button. Becca tries to mix it up a bit when it looks like they are losing the audience which angers Aubrey who kicks her out. When The Bellas suddenly get a chance to compete again they have to decide to stay with Aubrey's dead zone or spice it up with a Becca mash up.

There's a lot going on in this movie interspersed with some very nice vocal performances. Rebel Wilson is the stand out although lately she seems to be playing the same character in all her movies. It's refreshing to hear the always charming Anna Kendrick sing with a better than average voice. It's got it's funny moments mostly from the outrageous assessments by the commentators during the competitions. There's also an ongoing joke adding acapella to every adjective like this would be a much funnier movie if it was acca-better.
(Review by reesa)