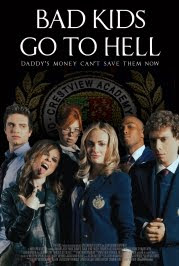 On October 10th BAD KIDS GO TO HELL, starring Judd Nelson and directed by Matthew Spradlin, will have its star-studded Dallas premiere screening along with a pre-opening look at the new Spring Valley location. The film, based on the popular comic book series of the same name, tells the tale of six private school students locked in a Saturday detention with a killer on the loose. Ben Browder (Farscape, Stargate SG-1, Doctor Who) also stars, as well as Ali Faulkner (Bianca in The Twilight Saga: Breaking Dawn - Part 1), Roger Edwards (Freelancers), Marc Donato (Degrassi: The Next Generation), Cameron Deane Stewart (Pitch Perfect), Augie Duke (The Mentalist), Amanda Alch (When Zachary Beaver Came to Town), Jeffrey Schmidt (Interstate), and Chanel Ryan (BASEketball) . The film was produced by Barry Wernick and Brad Keller, and had its world premiere at this year’s San Diego Comic-Con International, and screened at Stan Lee’s Comikaze and the Ruby Mountain Film Festival.

Beginning October 27th BAD KIDS GO TO HELL will also have an exclusive Halloween Sneak Peek run at all ten Studio Movie Grill locations, which include the seven theaters in Texas along with theaters in Scottsdale, Arizona, Alpharetta, Georgia and Wheaton, Illinois.

“Studio Movie Grill is extremely happy to host the Dallas premiere of BAD KIDS GO TO HELL and to welcome visitors to its newest flagship, which opens its doors to the public on Friday October 12th,” said president of SMG, Brian Schultz.

“We are very excited to partner with Studio Movie Grill and be a part of their grand opening week, as well as featured at all of their venues for an exclusive run for Halloween.” said Wernick.

Studio Movie Grill Spring Valley at 13933 N. Central Expressway; Dallas, TX 75243 will be the largest Studio Movie Grill to date. Offering 100% reserved seating, the state of the art complex will mirror many of the creature comforts of a home theatre with its spacious, comfortable leather recliners and dining tables. A dedicated bar, lounge, and lobby area are planned for the new space providing guests an opportunity to unwind before and after their theatre experience in an environment unlike the traditional megaplex theater. The ambience of the modern lounge area evokes a sense of calmness with a rich, earthly color palette offset by textured materials and smooth stone surfaces. Spacious new furniture appointments and modern classics will outfit the space capable of handling corporate functions, private events, birthday parties and lunch meetings, not forgetting that SMG has also been named Best Place To Take A Date by all its current cities.

The Spring Valley opening marks Studio Movie Grill’s 10th location and 7th in Texas. SMG has one location in the Atlanta area with a second location planned to open early November 2012 and recently opened in Scottsdale, AZ and Wheaton, IL with more expansion on the way For additional information, please visit www.studiomoviegrill.com.