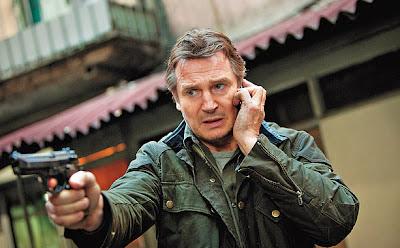 Liam Neeson is back as the CIA operative who goes into action when his wife and daughter are faced with danger. Directed by the appropriately named Olivier Megaton who brought us Transporter 3 another action packed blow out with a script written by Luc Besson and Robert Mark Kamen. The sequel follows the formula for the wildly successful Taken using the same actors, the exotic locations, and the father's over protective over drive.

Liam's Brian Mills a retired CIA operative now works at a car wash is on his way to give his daughter Kim (Maggie Grace) driving lessons. His ex wife Lenny (Famke Janssen) has just separated from her current husband and feeling a little sad. Kim has a boy friend now that isn't dad approved. Brian suggests that they go with him for a couple of days while he does a job in Istanbul. Kim thinks it's a good idea to get her folks back together. What they don't expect is that the family of the bad guys from Brian's rescue of his daughter in the first movie want revenge. Brian quickly realizes that there is a tail on them, and manages to warn Kim at the hotel who hides, and calmly relays a plan of escape for his increasingly panicked ex wife while he takes care of “what he does best”. The chase through the small crowded streets of the market place ends up getting them both “taken”. Of course Brian has a secret phone hidden on his person that he uses to call his buddies in America (no answer) and his daughter who insists on helping than hiding at the embassy. Her help consists of throwing grenades out the hotel window and off rooftops so that Brian can assess where they are located. There's also the obligatory car chase scene where Kim gets some intense driving practice.

The action is pretty predictable, but like the first movie, it's fun and mindless violence as Brian's one man fighting skills manages to eliminate the bad guys one by one. His anger is so in control and focused while at the same time soft spoken trying to calm his daughter and wife to safety. The bad guys are interchangeable (all dark, muscular, and hairy) that never seem to hit anything with their weapons before getting picked off by Brian and his ultimate thumping skills. Liam at 60 is still in prime shape, but doesn't seem to bounce back as quick as the last movie. At one point he tells the main bad man that he wants to stop because he's tired. And he looks tired too. Tired of the same old premise, that unfortunately opens the door for another movie. Hopefully they will do something fresher and less retreaded. If you like the first movie you will get more of the same in this one.
(Review by reesa)