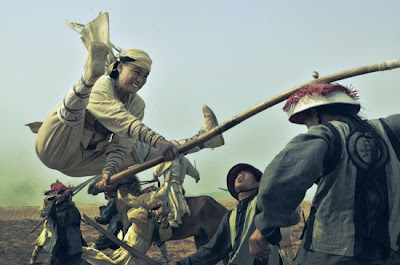 Director Stephen Fung (House of Fury) and writer Chen Kuo-Fu (Detective Dee and the Mystery of the Phantom Flame) crafted a frenetic kung fu trilogy that incorporates a taste of the old school 70's martial arts movies, with a touch of black and white silent film, animation, video game homages, wire work, and steam punk machines. Even the graphics on the screen give a self referential asides to the audience about the characters and the actors playing the roles. It's dazzling, humorous, and with impressive visuals contrasting the traditional values of 19th century China and the introduction of Western technology.

The story is about Yang Lu Chan (Jayden Yaun also known as Yuan Xiaochao who is the 2008 Men's Wushu Olympic Champion) who was born with a small horn on his head. A martial arts street performer known as Old Zhao (Fung Hak-on, founding member of Jackie Chan stunt team) sees what happens when Lu Chan's horn is accidentally activated. He tells Lu Chan's mother that the horn is known as “Three Blossoms on the Crown” which means that he's destined to be a martial arts prodigy. His dying mother's request to Lu Chan is to be the best he can be and leaves him to Old Zhao. Ten years later they are fighting with the Divine Truth Cult who cause chaos during the mid Ming Dynasty. When Lu Chan's horn is hit, it causes his eyes to roll back and his face contorts. He becomes a one man army defeating everyone around him.

Master Dong (Leung Siu-lung, 1970's kung fu superstar) tells Lu Chan that he must never let anyone touch his horn. If his horn turns black he will certainly die and right now it's red and purple. Also the martial arts style his master has taught him will put his life in peril as it relies on a hard stance which depletes his internal energy. He must completely alter his body's energy channels by learning an internal martial arts style. Master Dong tells him to learn Chen style kung fu. When the Divine is attacked his dying master tells him to find the Chen village.

His arrival is not welcomed by the village. He asks everyone where he can find Master Chen but because it's forbidden to teach anyone outside of family the secret of their style, he gets turned down everywhere. He cute meets Master Chen's daughter Chen Yu Niang (Angelababy) who is betrothed to Fang Zi Jing (Eddie Peng Yu-Yen) a well dressed dandy who has studied overseas and is coming to the village to introduce the railroad. The village doesn't want the new fangled western improvements, so the company sends in Imperial troops, Claire (Mandy Lieu) a western representative for the railroad and a huge Jules Verne mechanical machine that will destroy the village.

Lu Chen befriended by The Old Laborer (Tony Leung Ka Fai) the only one who has offered him advise and help him recover from his attempts to learn the Chen style. In video game format, Lu Chen battles at different locations of the village with the various masters of art. All the while they fight, he soaks up their methods like a gifted mimic. The Old Laborer sends Lu Chen out to damage the steam punk contraption that is run on coal and fly wheels. It give him hope that if he saves the village, they will accept him as a student.

The fight sequences are fun with angles and diagrams of the foot work mapped out. Choreographed by the legendary Sammo Hung it features the real life skills of the various guest martial artists like Xiong Xin Xin – Ghost Leg Seven from the Once Upon a Time In China series, Wei Ai Xuan a prodigy from Beijing Shichahai Sports School, Xu Hui Hui, Head Coach of the Italian Tai Chi Team, and Shen Si, 12th Gneration successor of Chen Style Tai chi. The great battle involving fruit and vegetables is a real hoot.

There's a lot going on in the movie and just when you think it's going to end, it fakes you out and offers another scene. This is the first movie of what is supposed to be two more movies in the adventures of Lu Chen and this reviewer is looking forward for more to come.
(Review by reesa)