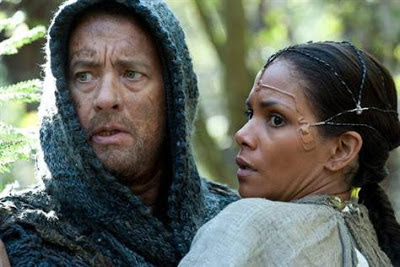 David Mitchell's 2004 novel Cloud Atlas is undoubtedly a difficult undertaking to adapt to the screen. There are six different stories that range from the South Pacific in 1850's to the 1930's in Belgium, the 1970's in San Francisco, to a technically futuristic Neo Seoul and then a post apocalyptic island which are all connected by a thin thread. Matrix directors Andy Wachowski , Lana Wachowski (formerly Laurence) and Tom Tykwer (Run Lola Run) wrote the screenplay and directed the intertwining storylines into an almost 3 hour film that will perplex, fascinate, visually stimulate and make one wish that each story had it's own movie.

This movie is the perfect film to come out at Halloween with the inspirational make up and costumes donned by the ensemble of actors playing the various characters in each time segment. While you gasp at recognizing Tom Hanks, Halle Berry, Jim Broadbent, Hugo Weaving, Jim Sturgess, and Doona Bae through the prosthetic and pancake layers, your mind is spinning trying to grasp a what is going on from the quick jumps between time and space. This movie is not for people expecting a linear film. It takes a good hour of patience before you realize and begin to connect what is happening. Once it starts rolling, you can adjust and sit back to enjoy. Fortunately during the credits, each actor is featured with their make up guise for your amusement.

The six stories involve the Pacific Ocean in the mid 1800's where Adam goes to visit the family plantation where he's poisoned by Dr. Henry Goose and is saved by a stowaway slave. Adam keeps a diary of his adventures. A copy of the diary is holding up the piano leg of a master composer in the 1930's who is being assisted by a young ambitious English composer Robert Frobisher. Frobisher writes his story in the form of letters to his lover Rufus Sixsmith and composes a symphony called the Cloud Atlas Sextet. That song is heard and mysteriously recognized by Luisa Rey, a journalist who is investigating a nuclear power plant from the information given by a whistle blower Sixsmith. The story is sent to the form of a manuscript to Timothy Cavendish a vanity press publisher. He's fleeing from a gangster client and ends up being committed against his will to a nursing home. The dramatization of his story is watched in the future by Sonmi-451 a genetically engineered fabricant server at a restaurant. She is being interviewed before her execution for rebelling against the totalitarian society that created and exploited her kind instigating a revolution. Her image is honored as a deity by the post apocalyptic humans who forage for life in the wilderness fighting from wild painted tribes. Zachary is asked by an “outlander” Meronym who is among a handful of technically advanced survivors to climb to the old lab on a mountain to send a message to their planet to return. The story eventually returns to Adam as he makes a change in the course of his life.

This movie is definitely challenging. Instead of six self contained stories, the chapters are jumbled together like mixed puzzle pieces thrown in the air. At times the changes in language nuances to depict different environments leaves the brain waiting for a light to go on, then the scene changes and it sets you somewhere else. Somewhere along the way, you are given a basic premise that love is the uniting factor in all these stories, and that is what helps us as humans survive whatever catastrophe that befalls us. This is the kind of movie that deserves to be seen again once one realizes the method to the madness. Unlike the Matrix which was astounding, Cloud Atlas is just as ambitious, clearly not for the average movie viewer as it begs to become less baffling.
(Review by reesa)