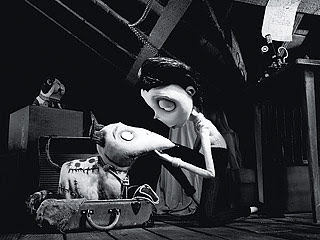 Tim Burton made over his 1984 short of the same name which was an homage to the 1931 classic Frankenstein. It's the first movie for IMAX 3D to use black and white stop-motion animation. Burton directed the feature from a screenplay by John August (Corpse Bride, Big Fish, Charlie and the Chocolate Factory). Burton's original story was based on the love of his dog Pepe while growing up who had a disease and wasn't supposed to live very long, but he did anyway. The eventual short got him fired from Disney because they thought it was inappropriate which is ironic since Disney is famous for killing off mothers (Bambi) and scary witches (Snow White).

Victor (voiced by Charlie Tahan) loves his dog Sparky, a pointed faced looking bull terrier type. He's the ideal dog that kids have in their minds as the perfect pet. His father Mr. Frankenstein (Martin Short) thinks Victor should spend more time outside like other kids instead of just talking to his dog and doing experiments in his attic makeshift lab. So while attempting to play baseball, Sparky runs after the ball and gets hit by a car. Heartbroken they bury him in the pet cemetery. His science teacher Mr. Rzykruski (Martin Landau) gives him the idea of using electricity when he reanimated a dead frog during a class. Victor digs up Sparky and sneaks him inside his lab and in typical Frankenstein mode using household electronic kitchen appliances to bring back his dog to life. Obviously since everyone knows the Sparky is dead, Victor has to hide him in the attic. But a dog is a dog and Sparky is able to get out and is seen by the creepy Igor type of kid Edgar E. Gore (Atticus Shaffer) who blackmails Victor into telling him his secret. The bullies of the class manage to wrangle Edgar's information from him and soon they are wanting to bring things back to life in order to win the school's science fair. Unfortunately their experiments on their pets don't have the same results. Their monsters run amok which in turn frightens the townspeople of New Holland (because you need a windmill for the climatic ending) rise up and want to destroy the undead dog.

Like most Tim Burton features like Edward Scissorhands, The Nightmare Before Christmas, and Beetlejuice there is always something a little dark and off kilter. A whole generation of Goth kids were probably influenced by his movies. Frankenweenie falls right in this category. Kids will want to see it, but for little ones it may frighten them with the dog death and the deadly chase in the windmill. But older kids will appreciate the humor. It's much better than Dark Shadows which probably would have benefited from being stop motion in black and white too. But there still seems to be something missing outside of just being an homage to old time filmmaking.
(Review by reesa)