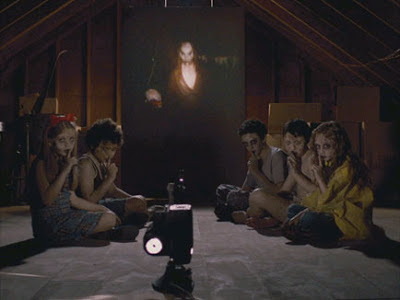 OK, so the movie poster said ORIGINAL for the new film Sinister. I LOVE the horror genre and was really kind of excited for this film.

Ethan Hawke stars as a crime writer/ novelist looking for his next big book after a 10 year lull. He has just moved his wife, free spirited son and creative daughter into a new house to be near where the latest horrific crime occurred, but doesn't bother telling the wife that the dead people died in the yard of the same house they are unpacking things in. Bad move.

To introduce the crime, there is Super 8 type snuff footage that is Ring-like creepy that explains the what, but not the who, or why. The film contents are just gruesome enough to horrify and generate interest in the storyline. I have to admit, the intro held an interesting enough premise and the movie progresses fairly well paced, unfolding little by little like any proper crime investigation does. Thing is, the daughter of the murdered family is missing and was never found. Some say she never will be. Enter the box of home movies in the attic. Basically, these films are an eyewitness account of each previous event, labelled by year with a tongue in cheek title. Kind of an odd discovery, and of course our writer has to watch them......all of them. One by one. Our writer, bleary eyed, fuelled by whiskey night after night, and suffering a little from insomnia (and things that go bump in the night and wake you up), comes to find out there has been a string of these crimes all across the country, each with a missing child out there somewhere and a very tragic connection. To add to the mental chaos, his son sleepwalks and is subject to night terrors, which provides us with some key jump out of your seat moments.

As the film goes on, one begins to get the feeling we have seen almost all of the crucial scary elements before. It is all there. Some Shinning, a little Exorcist Two, a little Haunting, some Poltergeist, tad but of the Paranormals, a touch of Amityville Horror, a little Skeleton Key, some more Ring and quite a few obligatory strange noises and bumps in the night, most with plausible explanations.

But as usual, we all begin to wonder why, when his son is freaking out and agitated and his daughter begins drawing dead people on the wall that she has never seen before, and his wife is threatening to leave him that maybe, just MAYBE, he should leave and go back home. If you get up in the middle of the night because someone or some THING has turned on your movie projector yet again (3 times- really?) and you are still there and putting your family at risk? I think you would at least turn on the darn lights when you walk down the hall and into dark rooms where creepy unknown things are happening. Better yet call the cops and let them handle it, even if one hates you and the other is over eager for his own 5 minutes of fame and has been helping you research. But we all figure out the end, before it happens as it becomes all too obvious through the story line like a big giant train wreck you can't stop.

This film had its world-premiere screening at South By Southwest Film Festival (as a hush hush midnight screening) and has been released by our good friends at Summit-Lionsgate who try so hard to give us proper horror flicks. But I felt the 70's and early 80's have still given us the best and most loved classic horror offerings.

The score is quite unique and very interesting in how it adds to the atmosphere and the tension that builds. All in all , the film was better than most recent and current of its kind but it did left me feeling quite unfulfilled at the end. (Really? That is how it ends?) Predictable with no alternate choices to redeem itself with.

Should you go? Heck, it is October and Halloween approaches. Think young, grab a date or an easily scared friend (a screamer is best) and go have a fright or two.
(Review by Cheryl Wurtz)

Posted by Dallas Movie Screenings at 1:12 AM