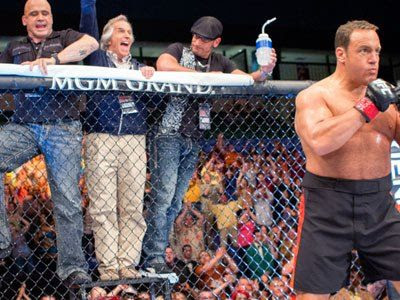 The team that brought us Zookeeper, director Frank Coraci and with the screenplay by Kevin James and Rock Reuben with Allan Loeb created a comedic mash up of The Warrior and Won't Back Down. There's the high school science teacher who gets involved with mixed martial arts fighting to raise money to save the music program in school and improve the quality of teaching. Like most Kevin James films, it's mildly entertaining but mostly cliché humor saved from being borderline annoying by it's supporting cast.

Scott Voss is a forty-something Boston biology teacher who won teacher of the year some 10 years ago but has since lost that fire. His classroom is filled with bored kids who just bide their time until the bell rings. There's the smart frustrated Asian girl who's ignored by Voss, there's the Hispanic kid who draws on this desk, and remarkably no visible bullies. Voss spends his time trying to date the school nurse Bella (Salma Hayek). The only teacher in the school that is still enthusiastic about his job is the music teacher Marty Streb (Henry Winkler). When Principal Betcher (Greg Germann) announces the budget cuts that will have to be made it's the music program that will be cut. It means Marty will be out of a job and his wife just found they are expecting their first child. Voss protests then promises that he will raise the $48,000 to save Marty's job. The only extra income Voss has is from teaching a citizenship class where he meets ex MMA fighter Niko (Bas Rutten). Niko tells him that even when losing a fighter can take home big winnings. Voss used to wrestle decides that this would be the quickest way to raise money. The second half of the movie is devoted to his training, fights, and eventual climatic big heroic moment.

Voss as a fighter is pretty inept. It's tiresome watching the barrel bellied teacher get mercilessly pounded while Niko and Marty are yelling for him to have some defence. His only redemption is that all the beatings brings an appreciation from the students and teachers because he's doing it to save the music program at the school. The response helps Voss realize why he enjoyed teaching in the first place. Especially when the token Asian kid (Charice) is upset that she has to quit music because her dad (Reggie Lee) wants her to work in his restaurant. He also helps his brother Eric (Gary Valentine, Kevin James' real life brother) realize his dream is not the painting business, but to be a chef. The feel good ending ties the various storylines in a nice neat bow.

Bas Rutten a real ex MMA fighter, now a commentator/analyst and Henry Winkler is the stand out basically stealing the movie from James, who has to run around in skintight wrestling spandex. Filipino singer Charice last seen on Glee gets to show off her amazing voice. Salma Hayek is under used as the love interest although she does get an amusing scene teaching Voss some fighting moves. Here Comes the Boom is a slight improvement over Zookeeper which destroyed brain cells. But only slightly.
(Review by reesa)