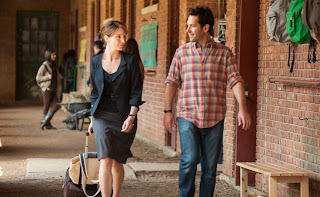 The process of applying to the college of your choice is left to the capricious moods of the admissions department in that institute of higher learning. The handful of humans in charge of reading your life essays and accessing your academic records must weed down thousands of applications that come in every year to find the perfect freshman to accept. Based on a novel of the same name by Jean Hanff Korelitz, it's been adapted to the screen by Karen Croner and directed by Paul Weitz (About a Boy).

Straight laced Portia Nathan (Tina Fey) has been working in the Admissions Office of Princeton for 16 years. When she advises the visiting students and parents who are considering spending the next 4 years and thousands of dollars, that there is no secret trick to become accepted. Portia takes a certain sadistic pleasure in controlling the fates of these young hopeful students as she scrutinizes their records with a fine toothed cone. During her recruitment travels to schools she visits New Quest School where John Pressman (Paul Rudd) recommends Jeremiah (Nat Wolff) as a special case applicant. The young man is unconventional, self taught, and brilliant, but doesn't have the academic shiny stars that Princeton looks for on their applications. Pressman also has another agenda, having gone to Dartmouth as did Portia. He believes Jeremiah may be the child that Portia secretly gave up for adoption when she was in college.

Portia was never good with kids. The thought that her child may exist is a challenge, complicated by the recent breakup with her department head boyfriend Mark (Michael Sheen) who has a bad habit of showing affection by patting her head like a dog. He just got a Virginia Wolfe scholar pregnant with twins and leaves Portia during a department dinner at their house. This makes Pressman even more attractive to her. She is conflicted in wanting to help Jeremiah who may be her son get into Princeton and following the rules of her job. She is vying for the head of the department against her rival co-worker Corinne (Gloria Reuben).

There's a low key type of humor that fuels this story. Tina Fey and Paul Rudd are both disarming and real in their manner and comedy. They are earnest and relateable. It's nice to have a movie that doesn't dumb down situations with over played slapstick. The best scenes belong to Lily Tomlin who plays Portia's mother, Suzanne. She's the woman warrior of the "Ms" days and has a Bella Azburg tattoo. Their complicated relationship would have made a really good movie. In the meantime, their application for box office success is on the "wait" list.
(Review by reesa)

Posted by Dallas Movie Screenings at 12:51 AM