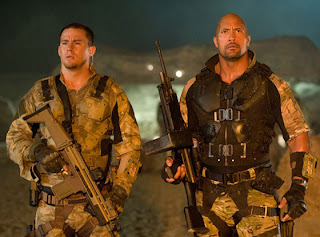 The first thing you notice is the big Hasbro logo, lest you think the film attached is anything more than a toy promotion. Once that mindset is in place and you are not expecting anything resembling human emotion or a complicated storyline then you can accept it just for what it is. A lot of things blowing up and characters doing impossible stunts. Director Jon M. Chu responsible for a couple of Step Up movies and the LXD:Legion of Extraordinary Dancers knows how to center on the choreography of the more interesting action sequences. It's too bad Zombieland writers Rhett Reese and Paul Wernick didn't infuse the script with something more than broad strokes.

Duke (Channing Tatum), Roadblock (Dwayne Johnson), Flint (D.J. Cotrona) and Lady Jaye (Adrianne Palicki) are the only survivors of the last movie, G.I. Joe: The Rise of the Cobra. The Cobra Commander (Luke Bracey) has been placed in a secret prison stuck in a stasis tube that allows him to hear and see, but unable to move. His Cobra henchmen of the ex-Joe Firefly (Ray Stevenson) and Storm Shadow (Lee Byung hun) have plans to break him out. First the Joe's are framed for stealing nuclear warheads from Pakistan and it seems like it was the President of the United States (Jonathan Pryce) may have been the one who set them up.

Storm Shadow is injured during the rescue and sent to the Himalayas to recover. Snake Eyes (Ray Park) and his apprentice Jinx (Elodie Yung), who is also Storm Shadow's cousin) are sent by the leader of the Arashikage Clan to capture Storm Shadow to answer for the murder of Storm Shadow's uncle the Hard Master. Thankfully they gave Lee Byung hun a chance to show off his killer bod and martial arts. This segment also has probably the best stunt in the whole movie, and probably worth the price of admission. They battle the ninjas flying through the air from ropes along sheer mountain walls.

Meanwhile Roadblock, Flint and Lady Jaye try to figure out what's up with the President and why all the Joe's were brutally attacked. Of course it's some diabolical plan by Cobra to take over the world.
The Joe's seek the help of the original G.I.Joe, Joe Colton (Bruce Willis) who has been in retirement. He offers his wisdom and a houseful of weapons. Will Cobra cause a world war of devastating consequences? Will the Joe's come in time to stop the dastardly deed? Do you care? This is purely adrenalin junkie movie madness. The dialogue is wooden and obvious. And the door is open for more G.I. Joe movies in the future.
(Review by reesa)