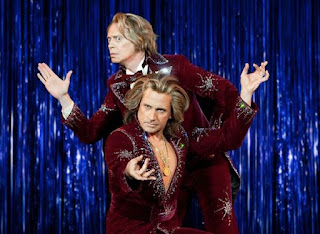 The cast alone sounds like one big comedy hoe down with Steve Carell, Steve Buscemi, Jim Carrey, Alan Arkin, James Gandolfini and Olivia Wilde. And then put everyone in sequins and Las Vegas with vintage 70's bad haircuts and what you get is The Incredible Burt Wonderstone. Television director Don Scardino and Horrible Bosses writer Jonathan M. Goldstein with John Francis Daley shine their attention on Siegfried and Roy style superstar magicians who are challenged by a Criss Angel type of street performer Steve Gray. If you are looking for real magic, it's not here. This is more like what happens in Vegas should stay in Vegas.

Burt (Steve Carell) was a bullied kid who got a Rance Holloway magic kit. On the VHS tape Rance tells his students that magic will blow people's minds and everyone loves a magician. At school, he's still bullied, but he meets Anthony (later as Steve Buscemi), a sickly, homely kid, who offers to be his partner. Their childhood friendship and ideas on their tricks takes them to a 10 year career working for Doug (James Gandolfini) as the main headliner “Burt and Anton: A Magical Friendship”. Burt has grown up to be a vain, egotistical, womanizer. Their assistant who they always name “Nicole” quits in disgust before they go on stage. Jane (Olivia Wilde) a backstage employee gets roped into being the new “Nicole”. Their act is tired and hasn't changed since they started. They can't compete with the wild and crazy Steve Gray (Jim Carrey), a buff, long haired street performer of dangerous stunts like holding his pee for a week, sleeping on hot fiery coals or cut a missing card out of his cheek. Burt and Anton are losing their audience and Doug wants to shut them down unless they can update their show. Burt stubbornly doesn't think they need to change. Anton suggests that they stay in a plastic box for week suspended in the air by a crane. The newest trick doesn't last long with Burt managing to alienate his audience, his boss, and most of all his long time partner and friend Anton.

The first part of the movie is enduring the preening Burt who can't see that he's now sunk so low that he's forced to do sample demo magic to sell products at Big Lots. It's not until he takes a job trying to entertain at a senior home for old Vegas performers where he meets his childhood hero who inspired him, Rance (Alan Arkin). Burt begins to see that like Rance, he has lost the joy of magic. The rest of the movie is spent trying to learn to love what he does again with the help of his friends who should have dumped him a long time ago for his bad behavior. Doug is having a competition for a new magician for his newest hotel concept. Who ever wins will get a contract and Steve Gray is Doug's brightest hope.

It should be noted that Gray's “tricks” are really gory stunts and probably not good for kids who think they are going to see a family comedy. In fact most of the so called comedy is just plain mean. Having said that, Carrey is probably the only funny one in the film despite his gross attempts to out do his rivals' attempt for a come back. The last magic that Burt and Anton come up with comes from their childhood idea book. Making the audience disappear. How they do it comes after you think the movie ended. Makes one wish for a little Penn and Teller.
(Review by reesa)

Posted by Dallas Movie Screenings at 2:48 AM