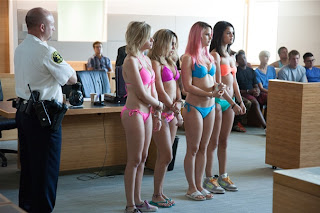 If you’re like me, after seeing Spring Breakers, Harmony Korine will be a name you’ll want to forget as fast as you more than likely learned it. Spring Breakers recently received the coveted title of “Worst Movie" at the annual SXSW Festival in Austin, Texas. In the film, Director Harmony Korine takes us through a shallow, lifeless story about a group of college girls who do some outrageous stunts to earn money for their spring break vacation. There were moments when I thought the script would make a turn for the better. However, when your characters are as one-dimensional (whether they were meant to be this way or not) there’s only so much they can accomplish. The acting is unbelievable bad. Again, for the record, I’m aware of Mr. Harmony’s tight lip bravado when it comes to his films. Are things intentional? Did he mean for it to come across as shameless and heartless as it does? No one knows except him. Damn me for thinking that films have to have at least one redeemable factor. For this film, one of those may be the talented and ever glossy eyed James Franco, who plays a white chocolate type gangster. Familiar with over-the-top roles, James takes this role with as much weight as he’s given. I for one, applaud him for that. Vanessa Hudgens and Selena Gomez, two notorious pop stars, are included among the lady spring breakers. Their characters were as relevant and likeable as any cadaver on any TV cop drama. They were there. They said some things. They caused some plot twists. End of story.

The cinematography was decent in some parts, with an overbearing amount of establishing shots with no character presence. Though I’m a fan of Skrillex, I’m curious on why he was used in this film when they also used work from Cliff Martinez, whose previous work was Drive. He manages to capture a tone for the entire film which I enjoyed, but was sadly under used in this reviewers opinion. Overall, this film is what it is. As cliche’ as that phrase is, it’s all that works here. I usually like to walk out of a movie and say to myself, "I get why that was made.” It’s hours later, and I still can’t answer that question. 3/10
(Review by Chase Lee)