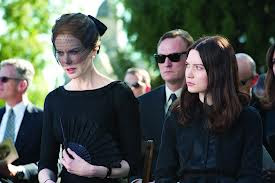 The invasion of South Korea directors fortunately included Park Chan Wook who brought us the classic Oldboy. In his first American feature he brings his particular vision to the script by Prison Break actor Wentworth Miller and Erin Cressida Wilson (Chole). Every shot is meticulous, soaking in the lush estate and surrounding woods, large round sculpted boulders, and the stylistic perfectly appointed rooms of the house. Even the costumes accentuate the coldness of the family within.

India (Mia Washikowska) doesn't like to be touched. It's disconcerting for her mother Evie (Nicole Kidman) who felt like an outsider as India preferred the company of her father Richard (Dermont Mulroney). It's her 18th birthday. Every year she gets a pair of black and white saddle shoes. In this year's box, there's a key. India always believed it was her father who gave her the shoes. So she wasn't ready to hear that her father was killed in a accident. At the funeral she meets Charlie (Mathew Goode) an uncle that she never knew existed. Her mother tells her that Charlie lived abroad from even before she met Richard. Charlie is full of sympathy and the needy unstable Evie invites him to stay at their house. India doesn't trust him. He's handsome, he's smiling, he genuinely seems to care.

Their housekeeper hasn't returned to the house since the funeral. Evie and India remark that it is strange to the ever smiling Charlie. Aunt Gin (Jackie Weaver) comes by after the funeral when she hears that Charlie has come to the house. Evie has a grunge against Aunt Gin and doesn't want to have a private talk with her. Gin slips her phone number to India. She tells Charlie that she's staying at the Baltimore, but tells the taxi to take her to another place. And for good reason. Little by little the natures of mom, daughter and the uncle are peeled away mostly through the perspective of India.

The performances are very cool and distant. The inherent weirdness of Charlie and India make Evie seem almost normal. Charlie whose good looks and earnestness seem slightly off as he tries to convince India of his sincerity. Especially creepy is the scene where Charlie and India do a duet on the piano the viewer is left wondering if it's India's sexual awakening or her imagination. When she catches her mom making a move on a responsive Charlie she runs away from her house and finds something about her self that she never knew before. There's a moment in the shower that will feel very uncomfortable afterwards.

Compared to Oldboy or Lady Vengeance this is one very repressed film by Park. It's still incredibly beautifully shot with music by Phillip Glass and Nancy Sinatra at choice moments. This Hitchcock type of psychological thriller is like a modern update of 1943's Shadow of a Doubt that had an uncle re-emerge who turns out to be more than what he seems. This not really a movie for everyone. It may be a little too pervy for some audiences. It may not be as satisfying as Oldboy, but it's a solid film and hope to see more of this director.
(Review by reesa)

Posted by Dallas Movie Screenings at 3:02 AM