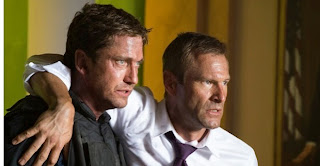 Apparently North Korea is the new bogeyman as evident in the Red Dawn remake that re-branded the bad guys from the Chinese to the new evil power that tries to take over the White House in director Antoine Fuqua's actioner. The screenplay by Creighton Rothenberger and Katrin Benedikt features the workings of the secret service assigned to protect the president with the technical advise of Ricky James, a security adviser and counter-terrorism expert. According to James it's possible to launch an attack on the White House due to the cut in defense budget and intelligence staff. Paranoid stuff.

Gerard Butler as Mike Banning was the chief the Secret Service staff surrounding President Benjamin Asher (Aaron Eckhart). An unfortunate accident causes Mike reassigned to a desk job in the Treasury Department. He misses his former position and the men he worked with, especially the friendship of the President and his young son Conner (Finley Jacobsen). When an aircraft breaches the Washington DC airspace shooting at the White House, Banning rushes over shocked at the carnage caused by an orchestrated attack. He rushes in to help and finds himself the last man standing. The President and staff are locked in the safe room with the South Korean Prime Minister that had come for reunification talks. With the President locked away and the White House under siege, the Speaker of the House Trumbull (Morgan Freeman) is announced as acting President. The Pentagon staff gathers feeding him intelligence on the situation that becomes clearer when Banning gets in touch with Secret Service Director Lynn Jacobs (Angela Bassett) who vouches for his capability. His first quest is to locate the President's son and get him to safety when they inform Banning of the real situation in the safe room.

This is a Michael Bay movie without Michael Bay with that old school 80/90's action genre style. There's a hard core patriotic theme in the film, and some interesting insight in to the men and women who serve the President and family with their own lives. However there is an excessive amount of violence throughout the movie. The bad guys led by the handsome Kang (Rick Yune) is just about as cool and intelligent as they come. He wants the President to remove the troops from the DMZ border and the occupying fleet from the North Korean waters. Their purpose and ultimate goal is kinda vague distracted by the pile of bodies that are sacrificed by the Secret Service trying to protect the White House. The audience is supposed to feel outrage and with gung-ho fever cheering the heroic efforts of Banning who single handedly must save the world. Butler does well in this part after his he-man persona has being watered down in some recent rom-com's. Lot's of plot hole and improbabilities Try not to think about that until you leave the theater.
(Review by reesa)

Email ThisBlogThis!Share to TwitterShare to FacebookShare to Pinterest
Labels: Olympus Has Fallen review