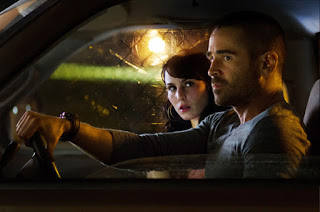 Danish director Niels Arden Oplev who made the original The Girl With the Dragon Tattoo paints a bullet ridden tale of revenge for his first film since Dragon Tattoo. Working from a script by J.H. Wyman, the movie is nicely paced, while peeling back the layers of story of a gangland player and his neighbor whose window overlooks his apartment. It's dark and unexpected at times, but if you are willing not to question some of the absurdities of the plot and just enjoy the ride wondering whats' going to happen next.

Colin Farrell is the stoic Victor who works for a gang led by Alphonse (Terrence Howard), a New York drug dealer. Someone has been threatening Alphonse and now his friend Paul is found dead in a freezer. Paul had a pieces of picture in his mouth and a cryptic note in his mouth. Alphonse thinks it's the Jamaicans who has been getting a bigger cut of profits from their drug trade. His unsanctioned kill puts him in trouble with his boss (Armand Assante). Meanwhile, Victor meets the scarred Beatrice (Noomi Rapace who played Lizabeth Salander in the Danish Dragon Tattoo) who lives with her mom (the iconic Isabelle Huppert) in a neighboring building. She's been waving from her window which looks directly into her apartment. Victor was affected by his gang partner Darcy (Dominic Cooper) who just had a baby who tells him even the most damaged heart can be mended. They have an awkward meet for coffee before Beatrice brings him to look at someone's house. It's the man who caused the DWI accident that crushed and ruined her face. He got a 3 week sentence and she wants revenge. She tells him this because she recorded Victor killing someone in his apartment. She blackmails him into taking the job.

Farrell and his eyebrows looking forever serious and controlled has his own agenda. He's attracted to his neighbor despite the fact she is holding the murder video as incentive to do her job. After a lot of smoking and eyeing each other, the pieces of the puzzle begin to fall into place. Farrell and Rapace keep you invested in their characters as they slowly peel back their stories. Howard is good as the paranoid gang leader who is freaked by the strange messages and the attempts on his life. Victor's friend Darcy is given job to figure out what happened to the freezer dead guy. The last act of the movie is a wild adventure with a few twists thrown in. Sure, it's a bit over the top, but the story is well constructed to keep one guessing.
(Review by reesa)

Posted by Dallas Movie Screenings at 2:24 AM

Email ThisBlogThis!Share to TwitterShare to FacebookShare to Pinterest
Labels: Dead Man Down review