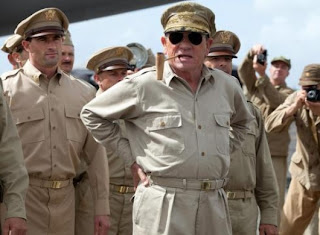 In post WWII Japan, General Douglas MacArthur is charged with investigating the role of Japanese Emperor Hirohito's involvement in the war and the attack on Pearl Harbor. Directed by Peter Webber (Girl with a Pearl Earring) and written by David Lass and Bera Blasi, it was joint American and New Zealand production. The cinematography by Stuart Dryburgh bathes the screen in brownish tones and the costumes and production design (Ngila Dickson and Grant Major) are impressively detailed. There's an old fashioned sweep of a historical drama narrated through an actual assistant to MacArthur who is assigned to decide the fate of the man whom the Japanese consider a god.

Mathew Fox is Brigadier General Bonner Fellers who had lived in Japan before the war had written a book on the Japanese national character. In flashbacks it is shown that he had fallen in love with a Japanese student while in college but he lost touch with her. Fellers gives his Japanese driver and assistant the task of trying to find what happened to her in the rubble of ruin from the American bombings before the surrender. Gen. Douglas MacArthur (Tommy Lee Jones), the Supreme Commander of the Japanese transition from war to peace is a flashy, opportunistic character with core of integrity when it comes to following the commands of Washington. The US wants to bring to trial the leaders of the country who started the war especially the attack on Pearl Harbor. Gen. Fellers is given the job of digging into the Emperor's culpability mindful of the delicate balance of the Japanese culture and the devastated landscape.

The bureaucratic web of details involves tracking down the leaders of the government with the ear of the Emperor at the time. Gen. Fellers questions and gathers evidence from the various key cabinet members who are more than willing to sacrifice themselves to save their Emperor. Fellers discussions with his girlfriend's uncle (Toshiyuki Nishida) expand upon the comparison's of Japan's occupation and the United States policies in other countries. Feller's also discusses the role of the Emperor in Japan and the repercussions if he is brought to trial as a war criminal. The possibility of Russia coming in and taking over while the country is recovering would also be problematic if they get rid of the Emperor. History is always written by the victors. MacArthur must figure out a way to make sure how this history is played. The ultimate meeting of the Supreme Commander and the Emperor is worth the wait during this often times plodding story. It's interesting, because it's based on actual events and the credits reveal the results of Feller's investigation. Just wish there was more Tommy Lee Jones.
(Review by reesa)

Posted by Dallas Movie Screenings at 2:21 AM