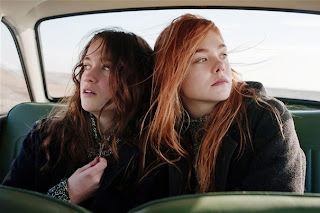 A slow burner? Yes, however writer/director Sally Potter keeps you glued to the screen to see the ultimate ride that these characters take. Set in London 1962, Potter manages to capture a beautiful, haunting realism of what happened during that period. The Cuban Missile Crisis has just happened and everyone believes a bomb will hit and everyone will die. That is just the plot that is overshadowed by the real plot happening between Ginger, Rosa and their families. Elle Fanning, Ginger, delivers as one of the most memorable performances she has had since Somewhere. Christina Hendricks, who plays Ginger's mother, also delivers a very good performance and I believe she will be a great up and coming actress if she does more films. She is best known for her hit show Mad Men.

It's an interesting story told through old school cinematography with vibrant colors. Some of the shots set up in the film reminds me of old film and has a nostalgic feeling. I thought it was a unique experience and something different than mainstream films. I would suggest to check this one out if you heading to a theater that plays independent films. 8/10
(Review by Chase Lee)