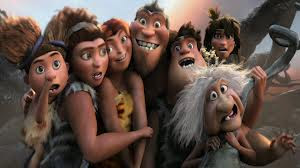 Dreamworks Animation with 20th Century Fox has produced a computer animated feature about a caveman family that faces the end of the world as they know it. Written and directed by Chris Sanders (How to Train a Dragon) and Kirk DeMicco (Space Chimps) the 3D adventure follows a prehistoric family who are forced to abandon their cave when the continents begin to shift. The first drafts of the script were written by John Cleese (Monty Python) and Kirk DeMicco back in 2005 as Crood Awakening. The main song Shine Your Way (performed by Owl City and Yuna) was covered by the top 10 contestants of American Idol.

The Croods are the last of the families living in their area after several family units had been victim to any number of hazards that plagued early man. The Croods survived by the overly protective father Grug (Nicolas Cage) whose strict rules he believes is what keeping them alive. The teen daughter Eep (Emma Stone) strains under the need to always be too safe and not take any chances. There's a big curious world out there and she wants to explore it. Grug makes it a point to reinforce the dangers by telling stories with wall painting to his wife Ugga (Catherine Keener), not so sharp 9 year old Thunk (Clark Duke), baby sister Sandy who is more like a small dog and wacky mother in law Gran (Cloris Leachman). All fun things are potentially bad and that means death.

One night Eep sneaks out of their cave when she sees a light. It's fire, an element that is totally foreign to her. It's being wielded by Guy (Ryan Reynolds) a nomadic wanderer who is smarter than the average prehistoric man. He tells Eep to come with him because he had a dream that their world as they know it will no longer exist. Eep is ready to take off with him, but her reluctant father is unwilling. Even after their cave is destroyed in an earthquake, it takes a lot of wild creatures trying to eat them, and his family's insistence before Grug agrees to follow Guy's plan to move to higher ground.

Their journey involves a lot of humorous moments and beautiful plants and creatures that they encounter. There's fish like birds that fly in schools, there's fish like creatures that lay on the ground like rocks. The colors and the inventive wild life is like a mini Avatar. The family story becomes one of a protective father who goes a little over board in his unwillingness to change, the budding love of his teen daughter to another alpha male, the stereo-typical nemesis mother in law who he always fails to count when making sure everyone is accounted after they are safe. There are some nice 3D moments in the film, but it's never enough to seem to justify the extra price for the privilege. It's fun, enjoyable, good for the whole family. The general message that kids may take from this is that trying new things is good and just because your parents say it's bad means they are just being overly concerned.
(Review by reesa)