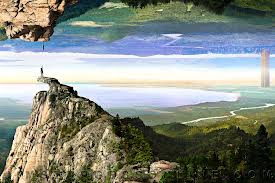 The son of one of Argentina's most important directors, Juan Solanas, has written and directed a romantic fantasy about two planets that have duel gravity. The Romeo and Juliet love story of star crossed sweethearts who live above and below is a visually stunning confection that lightly touches on the dystopian societies of the haves and have nots. The class struggle of the poor thinking the above world is full of wonders and the world below is full of ugly stupid people an attitude that exists in our own planet. There's also the theme of the clichéd big bad business exploiting the unfortunates in the world.

Adam (Jim Sturgess) is the narrator that attempts to explain that the twin worlds are unique in the universe as having two separate gravities. The complicated explanation is that matter is pulled by the gravity of it's own world, an objects weight can be offset by the matter from the opposite world which is called “inverse matter”, and long contact will cause inverse matter to burn. In this world, those above are rich, while the world below is in ruins and a source for cheap labor. Transworld is the major corporation that controls the energy between the two worlds. It buys cheap oil from below and sells it back at at higher rate. Adam had lost both his parents in a oil refinery explosion and he goes to live with his aunt in the country. It's there that she teaches him the family secret of the bees and their pink pollen. Travel between the world is strictly forbidden, but the bees are the only living creature that go from one world to another. While studying the bees he meets Eden (Kristen Dunst) from above while sitting on a mountain crag. As children they begin a friendship, that eventually becomes deeper despite the danger. Adam uses a rope to pull Eden into his world. Being together makes them an anti-gravity object which floats. When they are discovered together they try to go back to their own world. Eden is injured and she loses her memory.

Ten years later Adam is using the bee pollen to develop a cosmetic face lift cream. But he doesn't have the resources in his world to make it work properly. Adam sees Eden who he thought had died on TV telling of a contest to work for Transworld. This is a way for him to find her, and to work on his project. He makes friends with an above worker Bob (Timothy Spall) who helps him track down Eden. Eventually, the lovers will find a way to each other and getting to that point is interesting and unusual if somewhat typical romantic interludes of flirting, anger, remorse, and forgiveness.

What makes this movie so amazing is the visuals. The M.C.Escher style of world can be dizzy at times. Where the worlds sort of connect, there's sometimes mirror structures above and below. A dance hall has tango couples strutting on the ceiling. Adam's work cubicles are above and below with his fellow employee's all interacting. Going to a face to face with your boss makes one have to strap yourself in a seat while he elevates you while you converse upside down. The method that Adam uses to go “above” is a exciting sequence that reveals that going to the bathroom in inverse gravity is problematic. The ending may seem a little rushed, but when you leave the theater you may be looking at the ceiling for people walking upside down above you.
(Review by reesa)

Posted by Dallas Movie Screenings at 2:55 AM

Email ThisBlogThis!Share to TwitterShare to FacebookShare to Pinterest
Labels: Upside Down review