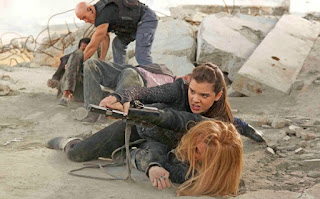 Plot: A teenage special ops agent coveting a "normal" adolescence fakes her own death and enrolls in a suburban high school. She quickly learns that surviving the treacherous waters of high school is more challenging than international espionage.

Imagine if the movie, Agent Cody Banks, was a person. Now, you saw them grow up and have a fun, luscious childhood and you are very proud of them. They were innocent and playful and you knew, deep down, when they hit puberty that they would have to mature ever so slightly. That time has come. Agent Cody Banks is turning 13. Puberty is setting in, acne is forming and getting oily, hairs underneath the pits are sprouting and the voice deepens thanks to the drop of the underwear hammock. This is great! He can move on from his childhood to his teenage years and do stupid teenage stuff? Nope. He continues to act like a kid, drink milk from a bottle, sleep with his parents and watches Dora the Explorer on his “down” time. That’s what this movie was like. It was the stepping stone of Agent Cody Banks by putting them in high school, drinking, cursing, but still had a light undertone and it didn’t know what it wanted to be having wasted potential because they didn’t mature, would could have been, a fun little story.

Hold on to your butts, ladies and gentlemen. This is going to be rough.

Let’s start with the fact that the production company A24 released this movie with DirectTV. That’s a weird combination. I remember when I added ice cream with mustard. A24, what happened? Did you lose a bet? You release some of the greatest films. Examples include: The Spectacular Now, Slow West, While We’re Young, Ex Machina, A Most Violent Year, Obvious Child, Under the Skin, Enemy, Locke and even the horrendous, Spring Breakers, which I will take it over this garbage. A24, I love you, but this is the biggest waste of time you have ever released.

Director, Kyle Newman, “directs” this uneven mess that felt like a straight to video release and was flatter than a ten-year-old Sprite Remix can. Coca-Cola, if you are reading this, bring it back, even if it’s for a week. Anyways, Newman has directed one of my favorite underrated comedies, Fanboys. It had heart, charm, humors and relatable characters. This is the opposite of everything I just said. First off, the title is already a bad sign. It’s supposed to be a teenage comedy with heart? Have cool assassin violence? Have comedy coming across as unfunny? It doesn’t know what it wanted to be, but I can tell you that the title is a reference to porn. That’s all I will say and it doesn’t set a good tone for the movie. Newman works with a water-downed story that could have been cool. The story set-up is that there is a teenage assassin who was adopted by an agency where they train assassins to become ruthless killers. The main character goes rogue because she wants to live her life and experience her teenage years. Not the most unique story, but you could have done something kind of entertaining with it. Instead, they throw forced teenage humor and try to turn it into the next Mean Girls. By the way, they show Mean Girls in this movie and reference it a few times. It was like the filmmakers were yelling at us saying, “Look, we can be cool like Mean Girls.” No, you most certainly cannot. You could have had the potential to make something very violent and character driven as a drama or a very funny comedy with great characters. It’s a bland story, has flat humor, uneven, just jumps from scene to scene with no fluidity and it was directed with laziness. It seemed like no actor wanted to be there…speaking of acting.

All the characters are flat and uninteresting. Their walking through the scenes and going through the motions, but I never once felt connected to anyone or even entertaining to watch. When they would attempt some “humor”, it was like watching delivering jokes on an open mic Dear lord; those awful one-liners they were uttering were atrocious. Those lines could be delivered better from a corpse with a stutter. Hailee Steinfeld plays the main character and she is wasted into a fish out of water in a high school bumbling around like an idiot. She is a killing assassin and this is what she is reduced to? Not her fault, it’s the scripts; but she still could have tried to make it interesting. She could have been a really cool heroine; but she was terrible and every line coming out of her mouth looked like a real struggle. It looks like True Gritwas your one and only good one. Everyone else was also one-dimensional and boring to watch. Samuel L. Jackson is in this, does it really surprise you? He plays the guy who has trained Steinfeld and that’s it. Seriously, that’s all we know about him. All of the characters have no depth and could be replaced by cardboard cutouts. Jessica Alba is in it as the villain. That’s cute. She is about as convincingly evil as a wet sock. Steve-O makes a cameo for a crappy joke. I love Jackass, but if you have to add Steve-O to your movie, you must have been desperate. There is no weight to any of these characters. The glass case models in a clothing store could act better than these people.

The cinematography is OK and it reminds me of an ABC Family movie coming on Tuesday afternoon when you are unemployed eating $1 dollar frozen dinners in your boxers. You are probably wondering why I got really descriptive. Well, I do that and now you know my life. The editing and special effects were a problem onto themselves. The green screen was really bad and takes you out of the movie. The VFX are equivalent to a CPU Game in 1993 and the fight choreography was uninspired and I felt like I was watching one of my homemade videos I made with my friends in high school. The way this movie is edited feels rushed going from scene to scene with some not explaining anything or some that have something happen in one, where you would think might take some time, and then jumps immediately to what the characters were trying to do. There is no tension or build-up; things just happen. Everything at the end of film just resolves so fast, that you could tell the filmmakers were getting bored with it and wanted to wrap everything as fast as possible.

A24, I am calling you out. I love the majority of your films, but why this one? I could do a better job than this film. If you read this, give me money and I will make a more cohesive, funnier film than this. I can’t recommend this to anyone. I can’t find anything that I liked about it. 0/10