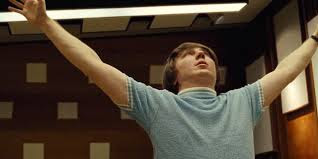 In the 1960's, the rock and roll music scene was dominated by the English invasion, but the home grown American sound was owned by the Beach Boys. Their music with the catchy beats and harmonies promised sunshine, bikini's, and surfing. Brian Wilson was the primary sound writer of the group, but also the most troubled. Director Bill Pohlad with writers Michael Alan Lerner and Oren Moverman approached the story of Brian Wilson in an unusual twist. The young Brian is portrayed by Paul Dano, and John Cusack plays the middle aged Brian. The story flashes forward and backwards in time and place while Brian is fighting the voices echoing in his head.

Dano gained weight to play the goofy, but insecure Brian when the band is beginning to form and growing in fame and popularity. Just before they head off for an Asian tour, he has a panic attack and breaks it to the band that he should stay behind and concentrate on writing music. His savant method of working with the studio musicians was unorthodox, but brilliant. He can see and hear in his head every note and nuance and patiently guides the music to perfection. His exacting details often times frustrates the people he works with, but he also gains their professional respect for the art that he creates. When the band returns, some of them are not really sure about this new sound. Some think they should go back to doing the tried and true surfer music. But Brian continues to suffer from auditory hallucinations that are exacerbated by heavy drug use.

His father Murry (Bill Camp) still harbors ill will towards Brian and for the band firing him as their manager. Brian suffers from never getting his approval of what he's accomplishing and from the physical abuse suffered as a child from his hands. Maybe that insecurity is why he falls so easily into the hands of Dr. Eugene Landy (Paul Giamatti) who isolates and over medicates Brian, now played by John Cusack as an adult. Because of his troubled grip on reality, he at one point didn't get out of bed for a couple years. His family gave Dr. Landy guardianship over Brian, with which Landy took full control of his property and his life. Brian meets Melinda Ledbetter in a car dealership where she works. She doesn't know who he is at first, but is somewhat intrigued by his honesty and randomness. It's not until she realizes that Landy keeps more than a close eye on everything that Brian does, and often times verbally abuses him, that red flags go up. She becomes determined to save Brian from being controlled and manipulated by the Svengali.

The film is filled with snippets of Beach Boys music that will cause nostalgia overload if your lived through those years. Watching Dano as Brian create the classic Pet Sounds album is enlightening giving one a new appreciation for his genius. Cusak, despite not looking anything like Brian Wilson or Paul Dano, still is able to inhabit the over medicated and struggling artist who is saved by the love of Melinda whom he later married. Giamatti is a bit over the top as the control freak who watches Brian's every move. If he had a mustache he would be twirling it. The sad events that took over Brian's life are well documented and he's fine now back to performing. But it's a nice reminder of the amazing music he created that will make you want to upload Pet Soundsfrom Itunes.
(Review by Reesa)

Email ThisBlogThis!Share to TwitterShare to FacebookShare to Pinterest
Labels: Love and Mercy review