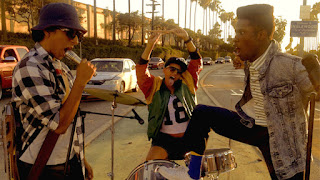 Here are the openers I wrote down for this review:

“This movie about as Dope as Dope.”
“This is the most absolute Dope in all of its dopiness.”
“I feel great because I am doped up on Dope.”
“This movie completely…rad, I mean Dope.”
“Dopey would love this movie and the other dwarfs would be jealous.”

I am in favor of the last one but all of those are terrible, so let’s breakdown this movie.

Plot: Life changes for Malcolm, a geek who's surviving life in a tough neighborhood, after a chance invitation to an underground party leads him and his friends into a Los Angeles adventure.

Pros:
Director Rick (I am glad I can write the last name down because I can’t pronounce it) Famuyiwa brings us into a colorful, ghetto that is unique, fresh and is one of the best movies of the year for me. The whole joy of this film is to go in without knowing anything. I saw the trailer once and I was good. The plot listed above is all you need to know. The story takes twists and turns that keeps the energy up throughout and is really effective with the humor. It is surprisingly very funny and with the frenetic story, it makes for one of the funnier movies at the theaters. The one thing I like about the direction is the world created. Many films suffer from a lack of world building with interesting characters; this is not one of them. I didn’t feel like the characters were forced or faked; instead, I felt transported into these kids’ lives and how crazy it gets over the course of a short amount of time. This film also has relevance in terms of today and how race is perceived and the whole saying “Don’t judge a book by its cover.” It’s subtle, but it’s there and told in this clever, hilarious story with heart. Also, the handling of the 90’s set in modern time was wonderful and brings you back to that awesome, strange era.

Cons:
There were a few characters and story plot points I kind of wished were explored more. They felt right to be there, but I just wished they were touched on a tad more.

Pros:
Everyone felt natural, had the proper arcs, and it felt like most people weren’t wasted and really fit into the story. Everyone was connected in some way. Shameik Moore was the standout as the main character, Malcolm. He was the most relatable and brought the humor and heart. He was relatable because I was and still am a geek. I kind of wish I had an exciting high school life like he did, but I digress.

Cons:
With the directing cons, there were two characters in particular that didn’t really get more screen time and story than the rest. One of those characters was also overacting, I kind of enjoyed it, but it reminded me of a Nicholas Cage performance. You will notice it when you see the performance. It’s almost as if he is straining to get his dialogue out.

Pros:
It’s a well shot movie and the colors pop out at you as extra eye candy. The three main characters dress in 90’s attire and accessories and it’s actually a cool contrast to the crime-filled streets of the ghetto and provides some subtle humor. Even in the action scenes, there are no shaky-cams present and you can actually see what’s going on. I am looking at you, fight scenes in Alex Cross.

Pros:
With the fast-paced environment, the pace keeps you entertained and you will become invested into the story with these colorful characters. This film flew by for me.

Cons:
This wasn’t an issue for me, but I can see some people feeling the abrupt halt this movie has in the middle. The first half is rapid; the second half is much more slowed down. I felt and realized the halt in the middle of the film and onward; but I thought it was necessary for the character growth need by Malcolm. This might be a concern for some viewers to check their watches, but I think you will be just fascinated by this whole journey.

Overall:
This is a fun, hilarious movie with some heart thrown in for good measure. It has, for the most part, interesting, well-developed characters, clever writing, great performances and a toe-tapping soundtrack. This is one of my favorites of the year and it is, and probably will remain, in my top ten of the year.