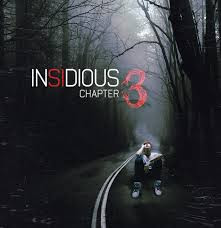 Don’t be confused, Insidious fans. Three is NOT a sequel to 2, but a prequel to the first Insidious, here to show us how it all the craziness got started before the Lambert family comes onto the scene. This film commences with teenager Quinn (Stefanie Scott) seeking out psychic Elise Ranier (Lin Shaye), who we meet for the first time. Elise is living in fear of using her gifts anymore and lives in terror of who she may encounter on the dark plane called The Further, and of what may follow her back into this life for she is living alone with her dog. As the film progresses, she most definitely finds her resolve and becomes ready to do battle, Poltergeist 1 mom style, to save Quinn’s life and very soul. Elise’s husband is also part of that realm as a result of suicide. All in all, The Further seems like a rather dark, depressing, sad and mopey place to spend the in-between for eternity, but it is where tortured spirits, demons and all sorts of dark things dwell.

Quinn’s mother has passed within the last two years and she is trying to contact her with some questions. As we all know now, once you open that door to contact, who knows what can slip through to creep on you. Quinn is living with her father (Dermot Mulroney) in an older already-haunted apartment building. After an accident leaves her bed ridden (think Rear Window and Misery) she is pretty much at the mercy of the demon and she ends up getting thrown around, quite a bit, by Mr. Creepy after periods of tense silence just waiting for things to go bump. So no chases or high physical action for her because she can’t move on her own. Dad does his best by calling in our Ghostbusting friends Specs and Tucker, who join forces with Elise for the real battle. The tension increases in increments for the entity is invading Quinn’s building, her window, her room and ultimately her bed. This film, however, is chock full of bonafide, jump out of your seat, screamers. Good ones that you never see coming. That is pretty much the extent of the scares for seasoned horror flick aficionados, but they are worth the price of admission. Some of the effects appear a bit cheesy (ala dry ice) and the dialogue and acting will not impress anyone. Thankfully excessive blood and gore are not on the menu.
(Review by Cheryl Wurtz)

Posted by Dallas Movie Screenings at 10:31 AM