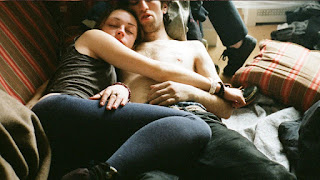 Plot:
Harley loves Ilya. He gives her life purpose and sets her passion ablaze. So, when he asks her to prove her love by slitting her wrists, she obliges with only mild hesitation, perhaps because of her other all-consuming love: heroin.

There many addictions out there. I found myself to be addicted to sweets and I constantly call Mrs. Bairds for discounts, but there many other terrible addictions. Jokes aside, drug addiction is something no one wants to see anyone go through and it can be absolutely terrifying. When I was ten-years-old, Requiem for a Dream came out on home video and I know you already thinking it, why did my parents let me watch it? First off, I didn’t watch it at ten, because I would be more screwed up than I am now; and secondly, I didn’t check it out until I was seventeen or eighteen. I am not that messed up. However, I did watch American Pie when I was ten so that might explain a lot. When I saw Requiem for a Dream, I was blown away on how surreal and damaging an addiction can be on a person. To this day, I have always held that film in the highest regard saying it’s the best drug addiction film I have seen in my life. Well, Heaven Knows What is a strong contender.

Before I begin, this is a pretty disturbing, graphic depiction about drug addiction and if you aren’t comfortable with those types of movies, then isn’t for you. My mouth even dropped on a few scenes.

Directors Josh and Ben Safdie bring us an in-your-face, raw look into the world of heroin addicts living on the streets. The way this movie is filmed and acted I swear I was watching real people actually doing these drugs on screen. It felt grounded and realistic and that’s the biggest complaint I can give on the directing. When you have a film that doesn’t feel like a fantasy and feels like you are witnessing people, then you have done the impossible of creating an illusion to where we can’t see through the trick. The other thing I found intriguing is that this movie, even from the credits, plays like a film from the 70’s or 80’s. The style of the cinematography and the way it’s edited does warrant the older look, but I don’t know if it was necessary. But all-in-all, for its low budget, this is the most authentic and grounded movie I have seen in a while and I have to give credit to the guys at the helm.

I don’t even know where to start with the acting. It’s very powerful and everyone hits on all cylinders. Arielle Holmes, Harley, is the main focus as she deals with the addiction of heroin and how it affects the people around her and the inner demons she deals with. This script is based on a book written by Holmes and I can see the emotion brought forth with her acting. Where did she come from? This is the type of actress that came out of nowhere and just blows you away with this film. I felt for her, the struggle she was facing and I really wanted to help her. This is a character where you saw potential, but you have no idea why something as addicting as heroin took a hold of her. This is the definition of a heartbreaking performance. The supporting cast is equally as good. Everyone portrays a drug addict with such depth. Everyone has battles they are going through and it shows as it is painful to sit through. The two people I have to point out are Buddy Duress and Caleb Landry Jones. Now Caleb has been in many films including: No Country for Old Men, Contraband and X-Men: First Class; but Buddy hasn’t been in anything prior and he kills it. Both of these represent something in Harley’s life and they are executed brilliantly…especially at the end.

This is where I have some issues. Listen, I all for handy-cam and I think it can add a level of authenticity to a scene; but when you are in an extreme close-up, sometimes that shakiness can be overwhelming. Those were the only shots I had problems with. Everything else was great and I loved the fact it looked like it was shot guerrilla style with the actors not knowing, adding why it feels like I was watching real people. The movie is only an hour and half and this is another thing that might lose people. This is a slow-burn. But, I look at it this way; if a movie about addiction is a slow-burner, then it’s almost the film is slowly seeping into you and slowly taking you over like the characters feel with heroin. I might be looking to far into that and that not make any sense, but that’s how I felt. I also have to add that the music is also pulse-pounding and really gets you filled with adrenaline like the characters feel when they take heroin.

This, without a doubt, one of the most heartbreaking, raw and graphic depictions of drug addiction and I loved it. It really gets under your skin and you think about many hours after you see it. The direction is great; the acting is powerful and filled with depth as we go on this harrowing journey of people really struggling with something they can’t control.This is one of my favorites of the year and it’s definitely on my top ten of the year list so far. 9/10
(Review by Chase Lee)