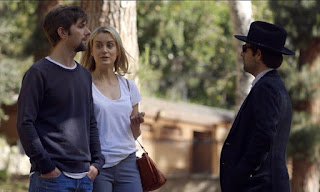 THE OVERNIGHT: fireworks; sparkler; or misfire? This film is a sparkler!

Depending on your level of modesty and feelings on the sexual revolution, THE OVERNIGHT could be a hysterically funny film for you or not. You know you are watching a sex comedy from the first seconds of the film because you are literally already "circling in it."

In the spirited tradition of the Oscar nominated 1969 film BOB AND CAROL AND TED AND ALICE, THE OVERNIGHT takes a modern day comedic look at the sex lives and marriages of two couples with children.

One couple, Alex (Adam Scott) and Emily (Taylor Schilling), have just moved from Seattle to Los Angeles with their young son, RJ (RJ Hermes). Attending a kids' birthday party at a local park, Alex and Emily meet an overly friendly and intriguing neighbor, Kurt (Jason Schwartzman). He invites the couple and their son over for a casual family pizza dinner and "play date" that evening with his wife Charlotte (Judith Godrèche) and son Max (Max Moritt). A curious night of crazy fun follows from there touching lightly on serious universal issues that all couples and parents face in some way or another like: making new friends as adults; putting your kids to sleep; sexual attraction to your husband or wife and others; what kids like to eat; career anxiety; and complacency and intimacy in marriage.

Of all the Duplass brothers produced films I have seen this year, this one was my favorite. Patrick Brice's (Writer and Director) script is witty, smart and, most all, believable. I did not find THE OVERNIGHT to be raunchy in its humor as many of the other 2015 summer releases in the same category. The Actors were expertly cast and had great group chemistry which allowed them to pull off comedic sincerity in their performances. Adam Scott and Jason Schwartzman are a fantastic pairing in every way especially in their unforgettable dance number.
THE OVERNIGHT has been a festival darling since its debut at Sundance. In life and in film, it always seems that laughter is in short supply. We can always use more, more, more. So if you can handle joking around and talking about sex, you will enjoy your time spent watching this film.
(Review by Erin Nicole Parisi)