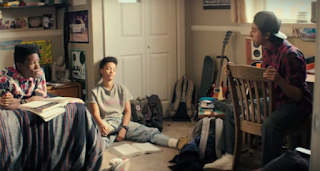 One can tell what kind of kid Malcolm is when he mentions bit-coin in the first scenes. He is an engaged teenager living a rough life in Inglewood near L.A. He has two friends Diggy and Jib who accompany him on his love of 90s hip-hop and excelling at school. The film centers on an insane and potentially life-ruining set of circumstances that takes the kids on a wild journey into the world of drugs. With some very comedic moments this film is telling the explicit truth of a lot of young black Americans today. Diggy is a lesbian who has her whole family trying to pray away her homosexuality. That scene is loaded with older black women bending forward and backward looking to the sky praying. It played off on the homophobic mentality of some hilariously. One pivotal scene was when we witness a non-aware teen killed and his blood on a Gameboy. That really brought the danger of the neighborhood to life. The first gang-member who comes on screen is wearing a cross but yet has a hostile attitude which shows the lack of understanding of God. This film is funny but so explicit that I found it hard to genuinely laugh. I did so only when a spectator witnesses a girl urinating in front of a cafe. He says “How can I eating my f-ing pound cake!” When the underage teenagers get let into a club the whole film speeds to another level. Allen Maldonado plays the bouncer who gets his rule ignored and ends up being severely beaten up by gang-members. That scene disturbs me as the kids are let through right to the side of the beaten up bouncer. The audience has an uncomfortable feeling about Malcolm’s choices. With everything that happens to Malcolm and his friends in the film, you want him to succeed. He’s aiming for a better life and to go to Harvard. Up to the events of the film Malcolm’s backstory is pretty clean and just about hanging out with his close friends. When one realizes what kind of bad situation the three teens are caught up in, you don’t know how they’re going to get out. The teens deal with heavy drugs in the film and multiple dangerous people so it freaks the common person out a little bit. The choices Malcolm makes are not the safest which just leads to a “cool party” becoming a beast of an after-effect. The scattered obstacles that come onto these kids are just falling one after another. I won’t ruin the movie by saying the ending but it does seem that Malcolm is close to becoming a street thug or going to prison. I did enjoy this tough area adventure story because although it was hard to handle, it told reality and used a unique geeky main-character.
(Review by Wyatt Head)