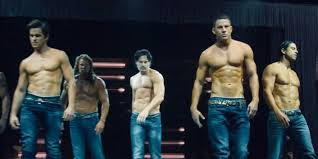 The second in what apparently will be a series on “male entertainers” will do well at the box office no matter what critics will say about it. Watching nicely formed men gyrate in various forms of undress will be titillating for some and somewhat annoyingly amusing to others. It's the kind of movie that was just made for the $$$, because there really isn't a story, but a series of adventures that leads to more male dancing and women throwing money at them. Directed by Gregory Jacobs and written by Reid Carolin it follows up the previous movie after 3 years. The guys are a little older and more beefcake than before, but still shallow and emotionally underdeveloped.

Magic Mike quit the stripping game after the last movie. Hoping to start his furniture company and propose to his girlfriend. But she said no, and now his company is struggling to pay his one employee. He gets a call from Tarzan (Kevin Nash) telling him that former boss Dallas has died. So Mike dressed in a sober suit goes to the hotel and finds a pool party in full swing. We are also greeted with the bare butt of Joe Manganiello as Big Dick Richie. It was obvious a lie to meet up with his former crew. Dallas and the new kid (from the last movie) went to Europe to ply their trade. Leaving the rest of the guys on their own. They want to go to Myrtle Beach for the annual strippers convention for one last blow out before they resume their lives off the stage. After some consideration Mike decides to join them, riding together on a street food truck of Tobias (Gabriel Iglesias). This begins the slightly episodic clips on their way from Florida to South Carolina.

The film gives a little time for character development for each guy. There's Big Dick who can't seem to find a steady girl because they are scared off by his...hence the name. There's Tarzan, the older guy who never really talked to Mike before, Tito (Adam Rodriguez) who will be selling snow cones for market research and picture perfect Ken (Matt Bomer) who will continue with his hopes of an acting career. Along the way Mike meets cute (as in peeing on the beach), Zoe (Amber Heard) which he ends up seeing later, but you knew that. He also meets up with ex girlfriend Rome (Jada Pinkett Smith) who runs her own stripper house, that's all exclusive for her only women clientèle that she calls “queens” offering more amazing dancers. Including So You Think You Can Dance star Stephen “tWitch” Boss, who dances circles around everyone else and rapper Donald Glover as Andre.

Andie MacDowell as rich divorcée Nancy gifts the men with a car and upgraded rooms at the convention. How convenient. And Elizabeth Banks does a turn as the MC at the convention. Mike thinks they need to refresh their act, and amazingly they come up with the routine, lighting, costumes in a couple of days. That's showbiz!

Why is it in female stripper stories, it's all sorts of skanky and drug fueled women, but male entertainers are featured as buff and fun guys? Anyway, that's besides the point. The audience will be screaming, at least they were at the advanced screening. Maybe it was because the dancers from Dallas's LaBare club were warmed up the crowd before hand. The movie is basically pointless, but lots of eye-candy depending on your persuasion.
(Review by reesa)