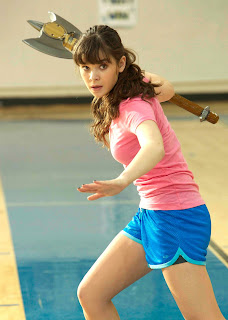 I still try to remember how much work it takes to make a film when I see something that is not so good. “Barely Lethal” follows Agent 83, who is played by Hailee Steinfeld in her journey into normal American teen life. She leaves a governmental assassin squad to seek her dream of becoming a normal teenager. She joins a high school under the name Megan Walsh and also as a foreign exchange student who is staying with a single-mother family. Later, non-exciting events happen. I felt that this was the first film I have seen that I felt like I had literally wasted my time. Hailee Steinfeld has not put forth her full potential in the last two films I’ve seen which were this one and “Pitch Perfect 2”. However, I loved her in “Begin Again”. To be honest, this film felt a bit dumb. The story of a new girl in high school I know has been done before. Besides the background of the character this film included the classic popular-making event, the nice boy, the hot boy, and the school dance. One thing I found a little adorable was that the young Agent 83 has a problem with the “no-attachments” rule in field training. She is seen hugging her doll instead of poking numerous holes in it which resembles stabbing arteries. I have to say I was thoroughly surprised that they got Samuel L. Jackson and Jessica Alba to be in this too. It seems that the actors really saw something in the story or maybe they filmed it for other reasons. When you first see the Agent feeling her comfy bed at her new home as Megan Walsh you see her happiness. You think about the animation in the opening credits which shows beds at the training camp to be like prison cots. It is quite nice to see Megan’s outfit for the first time. One realizes that she learned all she knows about teenagers from “Mean Girls” and different older media. There was a smart and funny line like a suggestion that a frog in an autopsy “kermitted suicide”. There was also a thing to think about when Liz, the daughter from the hosting family, says “Abandoning people is not how you help them.” Despite these lines I thought it was a light version of a high school story with no real character to grab onto. I didn’t have feelings for the characters. Although, I do give credit to the car chase scene in which that was an impressive stunt to film. Overall I have to say I was not enthralled at all but I hope that some teenagers will like it. I would say for the movie-goers to bring their mothers too as this film pleasantly did not degrade women.
(Review by Wyatt Head)