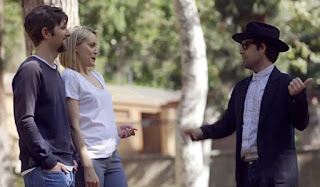 Have you ever asked out someone of the opposite sex? And it usually goes like this in some way shape or form. You prepare yourself, take a shot of your favorite alcohol, and take a deep breath before you walk over to them. You look confident and have all of the swagger in the world. You are a pimp. You get to them and you spit out the worst line in pick-up history. In the most nervous fashion you utter, “Have you…have you ever been…did you survive the fall from…from…you’re an angel.” She laughs. She is ultimately charmed and finds that line kind of cute. We talk for hours. The bar is closing and you ask that pivotal question, “Can I have your number? It would be great to hangout again.” Then she tells you she has a boyfriend, walks away and you go home and rock in the fetal position. That’s what this movie is like: It’s a good idea, there is great buildup to it, you have with it and then after the climax you feel ultimately underwhelmed.

Plot: Alex, Emily, and their son, RJ, are new to Los Angeles. A chance meeting at the park introduces them to the mysterious Kurt, Charlotte, and Max. A family "playdate" becomes increasingly interesting as the night goes on.

Pros: Without spoiling anything, the idea and story are interesting and do provide a realistic approach to a married couple that wants to spice up their lives and try something new. What director Patrick Brice manages to do is create this adult movie that doesn’t shy away from sexuality and goes places many directors would shy away from. And you have to give him props on that. This also one of those movie where you are just fascinated on how this movie will end and Brice keeps that curiosity flowing and it definitely hooks you. I like the fact he doesn’t “Hollywood” the situation at play and keep it real to what might happen if this were to occur between two couples. But on the other side on that same coin…

Cons: The buildup and strange eerie feeling of this story is great, but the climax is cut short and leaves with an unsatisfied feeling with movie ending shortly afterwards. The weird thing is that the climax and the way it plays out are realistic; but it’s a big one because it does affect your viewing experience just from the way the movie plays out. The other thing is that this movie isn’t as funny as you would think. Not a bad thing, just don’t expect that from this cast.

Pros: Adam Scott and Taylor Schilling make a convincing couple and I liked their chemistry. Jason Schwartzman is definitely out of his comfort zone, which is an understatement, and he does a great job in his role.

Cons: Adam Scott’s character is kind unlikeable, even though I understand where he was coming from, but he was kind of too abrasive about it not really thinking about his wife when he makes certain decisions. The development from all four characters is weak and is really thin. I was a bit more was explored. Judith Godreche plays Schwartzman’s wife in the film and she is almost a throw away, not adding much to the story or have a strong enough character to be memorable.

Pros: The nightlife of this film is shot well and adds this innocent glow to it when the subject matter is risqué and raunchy, so it’s a nice contrast. The shaky-cam used isn’t too overbearing and shaking all over the place.

Cons: Some of the scenes are a tad too shaky, but it didn’t bother me.

Pros: This film is about 80 minutes so it’s short, sweet and to the point. The synopsis is interesting enough to keep your attention throughout.

Cons: The downside to the short running time is that it does limit possibilities to further character development, which it does.

Overall: This is an interesting movie that tackles sexuality within a married couple looking to mix things up with good acting and believable chemistry between everyone. It is, however, too short for its own good and wished characters were explored more and the ending was a bit more satisfying.

It’s something different and still worth checking out…and I am also a huge Adam Scott fan.
(Review by Chase Lee)