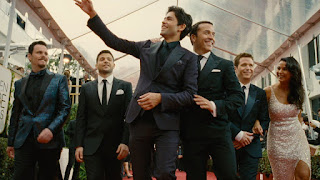 First off, if you have never seen the eight season HBO TV series of the same name, you will still be entertained, probably in the same way it was amusing on the small screen. Written and directed by Doug Ellin, it continues the adventures of the four friends from Queens and the tightly wound former agent shortly after the series ended. The series was inspired by producer Mark Wahlberg's experience in Hollywood.

The movie begins with Victor Chase (Adrian Grenier) celebrating the end of his marriage during the honeymoon on a yacht with lots of bikini clad women and booze. He gets a call from his ex-agent Ari Gold (Jeremy Piven) who landed a job as a studio head. For his first project he wants Vic to star in a futuristic Dr. Jekyll and Mr. Hyde movie called “Hyde”. Vic feeling a need to branch out agrees, but only if he can also direct the film. Ari manages to bankroll the film, but when they go through the $100 million dollar budget, he is forced to go Texas personally to ask financier Larsen McCredle (Billy Bob Thornton). Larsen said they will get the money, but they have to bring his spoiled stupidly arrogant son Travis (Haley Joel Osment) to oversee.

It's the bromance of the group that keeps the film moving and it's the pop up cameos of actors who play bigger and badder versions of themselves for the interest. Eric, or “E”(Kevin Connolly) was Vic's manager has now become the producer of the movie. It's his job to approach Ari with the need for more money. He's distracted by his slut mode where he's doing it with all these different women while his ex Sloan (Emmanuelle Chriqui) is pregnant with his child. Turtle (Jerry Ferrara), the driver, no longer fat, made some good investments and is trying to date MMA fighter Ronda Rousey. Kevin Dillion kills as usual in his role as Vic's brother Johnny Drama. While his brother has found success as an actor, Drama is still pursuing featured extra roles. Vic casts him in a small but pivotal role which he believes will bring him success.

The guys thrown a big party to show what's been filmed so far, but Vic is freaking out about his art and how it's not perfect yet. Ari, manages to get a hold of a DVD and the fear of blowing his career is put to rest. Except now, Travis, who has no taste in movies gives him a list of changes he wants made on the film if they want to get the money to complete the film. His first and major change is to cut Drama out of the movie. It quickly escalates into taking Vic off as director, and doing the film again under someone else.

The friendship of the posse endures, while celebrities pop up and they continue talking like nothing happening. Most of us would go, “shoot, wasn't that ___?”. They shrug and go on with life. It's an insider glimpse of Hollyweird. It could have just played on as an HBO movie of the week. But the early summer theater run is worth the popcorn. It may even encourage you to catch the series on Netflix if available.
(Review by reesa)