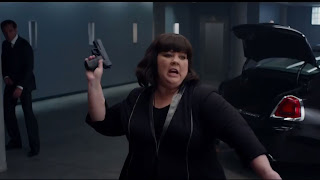 It bodes well for director/writer Paul Feig has also wrote and currently directing the new female cast of Ghostbusters since his new film Spy will be the best of this summer. Melissa McCarthy who stole the Feig movie Bridesmaids and for which she received an Oscar nomination, toplines this one which promises to make her the biggest star of the year.

McCarthy plays Susan Cooper a CIA analyst who works in a basement amidst bat guano, mice and top of the line computers while guiding super spy Bradley Fine (Jude Law) through his missions via ear phones. She is impressed by how smooth and suave he is and can't help motor mouthing her obvious crush on him. When the mission to catch Bulgarian Rayna Boyanov (Rose Byrne) goes south, the CIA is in a bind as Rayna has intel on their top agents, including Rick Ford (Jason Statham). Rayna is selling her father's nuke and she's the only one who knows where it's stashed. They need to send in an unknown agent to get eyes on Rayna and her contact, Italian Sergio DeLuca (Bobby Cannavale). The unassuming Cooper volunteers since after all she's been trained as an agent. To her boss's (Allison Janney) amazement, Cooper had gotten high marks in her marksmanship and fighting skills, as well as her current technical prowess. She is given a dowdy cover story which she says “looks like someone's homophobic aunt” and sent to Italy. Her contact agent in Rome is Aldo (Peter Serfinowicz) who creeps her out with a stereotypical Italian gigolo pandering. Ford, who quit the CIA in protest of sending Cooper, is also there and almost blows her cover.

Cooper proves to be deceptively lethal and decides to continue on by trying to get close to DeLuca at the casino. While stalking DeLuca she sees Rayna. She also sees someone spike Rayna's cocktail. Knowing that Rayna is the only one who knows where the nuke is hidden, she saves her from certain death. They develop a bitchy relationship as Cooper tells her she was hired by her father as her bodyguard. Nancy (Miranda Hart) who is Cooper's basement handler, shows up in Italy because Cooper turned off her communications. She is also roped into working with them. All sorts of action ensues as someone is trying to kill Rayna who they have to keep alive so the deal can go down.

McCarthy plays Cooper like an every woman. The jokes are thankfully free of weight shaming. The catty exchange between Rayna and Cooper revolve around their clothing and hair. Bryne is delightful as the cold deadly Rayna. Statham is a comedic wonder playing on a most interesting man in the world image while listing all the adventures he's endured that sound totally impossible.

The trailer for this film does not do it justice. It makes the movie seem like slapstick, but there's more going on. The gender bias is obvious as most of the men in the film are somewhat buffoonish but nice to look at. The women are competent in their skills, even if their self awareness is not up to par. They are more real. Look forward to multiple viewings of this, as the laughter will drown out parts that you will want to catch again.
(Review by reesa)