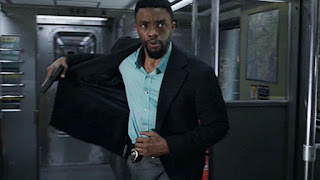 Black Panther actor, Chadwick Boseman is now a driven cop (Andre Davis) who has a history of being a "Dirty Harry" type with quite a few bodies to his credit. He lost his own policeman father, as a young child, to violent criminals and has grown into an investigative version of his father, with the skills of Sherlock Holmes of TV's "Elementary" fame.

The film, by Brian Kirk, begins with Davis's reputation under fire. Fast forward to a botched cocaine robbery , at a restaurant after hours, where 8 cops and a civilian die horrifically. The two robbers leave with just a portion of a shipment that's way to big to have been expected. The cops calmly arrive, mid robbery, and tap on the door to gain entry when no apparent call has gone out. After that there are many clues that this impending pursuit of more than just a chase to apprehend and arrest two cop killers.

Originally titled 17 Bridges, but amended when discovered the count was wrong, this film is a thoroughly enjoyable and entertaining ride through Manhattan Island. In a rare move, all ways off the island are shut down to prevent the cop killers' escape. Time is of the essence. This film is presented with time stamps, like a well known older TV series was, as the night unfolds. The camera is used to give us some bird's eye views of street scenes and skyline. We think we have just three populations to keep track of in the film. Civilians, bad guys and cops. But we come to learn that there is more to the story and it is more complicated than we realize. Boseman is joined by a fellow officer Frankie Burns of that local precinct, played by a terribly serious and intense Sienna Miller.

J.K. Simmons plays her boss, Captain McKenna, in whose precinct the incident happens. Taylor Kitsch plays Ray, the trigger-happy, animalistic cop killer whose younger and more innocent partner, Michael (Stephen James), doesn't share the same comfort level with blowing people away. On to selling the cocaine and laundering the bills before plans are made to get out of the city while every stop near TV news reports brings more detailed public exposure of the criminals, to their chagrin. The nets grow smaller.

It is interesting to see the interplay between the investigators and modern technology. Eye in the sky is alive and well in NYC. The pursuit through the city streets and buildings is tense and action filled. The violence just gratuitous enough. The surprises and jumps are real and well filmed. (I don't jump and it got me 4 times). Plot holes aside ( I mean seriously how far does a Subway train go before it's next stop?), I pleasantly enjoyed this film and it's immersion in the arena where we wonder who is the good guy and who is the bad guy. The conclusion is certainly satisfying. There will be shake your head questions regarding the storyline as to "was that realistic and entirely possible?" but it's still a good time at the movies if an action crime drama is a favorite genre of yours.
(Review by Cheryl Wurtz)
Posted by Dallas Movie Screenings at 8:19 PM