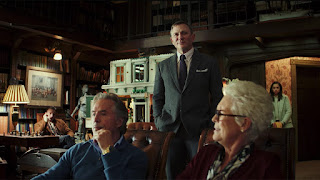 There is no better film to see, this weekend, than Knives Out, a thoroughly rousing romp of a murder mystery that is highly entertaining. A stellar ensemble cast, bitingly witty script, a fantastic setting in a wonderful old house that could be it's own character, a fast paced and intelligently delivered storyline that's enjoyable to follow, all combine to make for a great night out at the movies. Knives Out is a must see for the holiday season. Writer/director Rian Johnson has created quite a few memorable characters in the process.

Successful author and publisher Harlan Thrombey, the family patriarch, has invited all of his descendants to his large Victorian house, with the hope of reconciliation for several of them, and for his 85th birthday celebration. He dies sometime late in the night and is discovered by his nurse. It's very complicated. Then the real party begins. As per usual, it turns out that several people have motives.

Daniel Craig is eagle-eyed Detective Benoit Blanc, a private detective who investigates the murder of Harlan (Christopher Plummer). Chris Evans shines as Hugh Ransom" Drysdale, the victim's independent and very high maintenance grandson. Ana de Armas portrays Marta Cabrera, Harlan's beloved nurse and close caretaker, who was the last to see him alive. Jamie Lee Curtis is Linda Drysdale, the oldest daughter, a successful real estate exec with husband Richard (Don Johnson) . Michael Shannon is Walter Thrombey, the youngest son who appears to have attained control of his father's publishing company. Toni Collette is wacky as Harlan's daughter-in-law Joni, a lifestyle coach who's husband has passed on. Add more detectives, Walter's wife Donna, a social activist grand daughter, a wonderfully quirky internet trolling younger grandson, Harlan's elderly mother who sits and listens and watches but cannot see well and does not interact, a reserved behind the scenes housekeeper, and the complicated pot begins to get stirred. Frank Oz even makes an appearance as Harlan's lawyer. This film certainly puts the fun in family dysfunction.

Highly rated on rotten tomatoes and favorably reviewed by critics everywhere as a modern take on the classic who-done-it, the redirecing twists and turns make for a fun ride. Avoid spoiler exposing reviews at all costs because the people with motives have some deep dark secrets. Letting them all unfold during the film adds to the viewing pleasure, once you figure out the cast, and all of their relationships and histories. Enjoy.
(Review by Cheryl Wurtz)