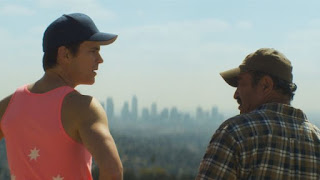 Sean, the TV weather guy, has a major meltdown on air that involves openly weeping. The American-Irish comedy-drama film directed and written by John Butler premiered at the 2018 Toronto International Film Festival. Sean, played endearingly awkward by Matt Bomer, is told to take a sabbatical by his boss Ash (Wendi McLendon-Covey) and to take as long as he needs. This is a low keyed story wallowing in Sean's self involved depression while he latches on to an older day laborer who doesn't speak much English.

Sean is in an emotional abyss due to the 6 month absence of his partner, Carlos. He leaves annoyingly needy messages on Carlos's phone about how well he is doing without him, which of course he is definitely not. He lives in a beautiful hillside house with a huge deck that overlooks Los Angeles. In the middle is a potted tree, the last thing that Carlos left. Sean gives it away, and now is left with a sun spot in the middle of the deck. Hitting the hardware store he hires one of the day laborers that are dropped off each morning to paint his deck. Alejandro Patino plays Ernesto who agrees to $20 an hour to fix the spot on the deck. He tells Sean in his broken English that it will take a few days to complete. Sean finds himself using Ernesto as a therapist who only nods and says yes, not a clue what Sean is going on about. Sean begins to treat Ernesto as a paid companion, buying him Thai food take out, taking him hiking, taking him rowing at the city lake. Ernesto's wife Linda (Elena Campbell-Martinez) says he's like Julia Roberts in Pretty Woman. Even his fellow laborers tease him. Clueless Sean takes him to a party with his gay friends who welcome Ernesto who despite himself, has a good time after a few beers.

Although Sean considers him a friend, he doesn't even know his last name ore even his phone number. When Ernesto stops showing up at the hardware store spot, Sean starts falling apart. He begins to wonder if Ernesto was really there. The unhealthy one-sided relationship that he had forced on Ernesto comes to a head when Sean attempts to track him down in Pico Rivera, the only information that he had on him besides being married with five children. It's fortunate that Ernesto is a good hearted family man who sees Sean's lonely desperation with some universal understanding.

Sean doesn't even like the weather. It's always sunny and hot in Los Angeles. The howling of the coyotes in the foothills keep him awake at night. He's adrift without his Carlos whose picture on his phone is his only company. The idea of Sean paying Ernesto for the deck which becomes more like a $200 a day paid companion is uncomfortable. Sean is too far invested in trying to seem OK to see what he is doing is wrong minded. Bomer gives a great ditzy performance that challenges one to like him even when he should be sat down and told to chill. Patino is expectantly confused and amused by the crazy gringo who doesn't shut up but pays him for not working. It's a nice hour and half distraction that's now available on DVD.
(Review by reesa)