John Cleese to Receive the Ernie Kovacs Award at DVF 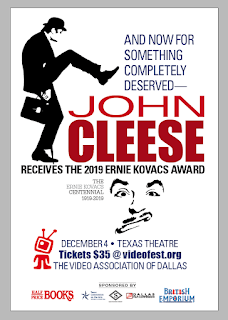 Cleese will be on hand to receive the award as well as Ron Devillier, retired KERA programmer who brought “Monty Python” to Dallas and then to the rest of America in 1974, will be recognized. Joshua Mills, son of Edie Adams and keeper of the Kovacs flame, as well as Ben Model, official archivist for the Edie Adams and Ernie Kovacs collection will both be in attendance.

Ernie Kovacs has been a key component to the Dallas Video Festival since it began in 1987. Over the years, the Pythons’ work has been a highlight in Dallas VideoFest’s programming including showing the rarely seen German version of “The Lumberjack Song,” screening the 2014 documentary: MONTY PYTHON: THE MEANING OF LIVE, and awarding the Ernie Kovacs Award to Terry Gilliam in 1998.

Ron Devillier, retired programmer of KERA-TV, Dallas, who brought the broadcast of the Python series and the wonderful craziness surrounding the decision to do so:
“What a pleasure it is for me to be joining the celebration and salute to my two favorite comedy TV series: ‘The Ernie Kovacs Show’ and ‘Monty Python.’ ‘The Ernie Kovacs Shows’ of the ‘50s and the ‘Monty Python’ series of the ‘70s are two outrageously original comedic creations that shattered the boundaries of television broadcast tradition in a most hilarious way. John Cleese, a key Python creator and performer is a first-class selection to receive this Kovacs Award. Cleese’s writing and performing in ‘Pythons’ and ‘Fawlty Towers’ are classics in the genre.”


Bart Weiss, founder/artistic director of Dallas VideoFest, on the importance of Ernie Kovacs:
”The very first program our festival was Edie Adams showing the work of Ernie Kovacs. Ernie’s innovative spirit has been with us these 32 years of running the festival. The Kovacs Award became the perfect way to honor those whose comedy change the way we look at TV/Video much like Kovacs did. With John Cleese, we have a direct line in how Kovacs used the lens, the mise-en-scene cutting, and a sophisticated vision of silliness, that leads to moments of television that reign deep in our collective memories and can help make you smile during the worst of days.”


Joshua Mills, Edie Adams’s son and keeper of Ernie Kovacs Estate:
“Alec Guinness said upon meeting Ernie Kovacs on the set of the film, OUR MAN IN HAVANA that there was a comedic connection between mad-cap American Kovacs and the silliness of the iconic British comedy of The Goons. It’s only fitting that the recipient of the 2019 Ernie Kovacs Award at the Dallas VideoFest be given to John Cleese, who shares the same sensibilities as Kovacs in finding humor in authority figures, a cockeyed world view and of course, a love of silly walks.”


Ben Model, Official Archivist for Ernie Kovacs & Edie Adams, Ediad Productions:
“Ernie Kovacs’ anarchic television comedy lives on in the Monty Python television shows. Ironically, most American audiences (especially those of a younger generation) discovered both shows on public television around the same time, in the mid-to-late 1970s. In both cases, the programs’ disparate sketches jump from one topic or style to another with reckless abandon, bridged briefly by Kovacs seated in a TV control room, and by John Cleese at a desk announcing 'And now for something completely different.’ John Cleese’s comic vision that manages to be simultaneously smart and silly, cultured and outrageous makes him an excellent choice as the recipient of this year’s Ernie Kovacs Award at the Dallas VideoFest.“


About John Cleese
John Cleese describes himself on social media as “a tall person who likes lemurs, coffee and wine. He's also been known to write and act a bit.”

While the people who work with him say: John Cleese was born and brought up in Weston-super-Mare. However, he recovered to win a place to study science at Cambridge. After sampling the conversation in the Chemistry laboratories, he switched to Law. The success of the 1963 Cambridge Footlights Revue, which played in the West End and on Broadway, saved him from a legal career.

He first shot to fame in England with The Frost Report in 1966 and in 1969 co-created Monty Python’s Flying Circus. The team went on to conquer the world with four cult TV series and four hugely successful films, And Now For Something Completely Different (1971), Monty Python and the Holy Grail (1974), The Life of Brian (1979) and The Meaning of Life (1983). The Pythons reunited for a one-off series of 10 live stage shows in the UK in 2014.

After leaving Python, Cleese moved on to create Basil Fawlty, the hotel manager from hell in Fawlty Towers. As one of the most successful TV series ever made, the 12 episodes of "Fawlty Towers" have been repeated on the BBC many times.

In 1988, he starred in and co-wrote A Fish Called Wanda. He reunited the stars of Wanda in 1996 to make Fierce Creatures, a film about a zoo, which went on worldwide release in 1997.

For his work on television, Cleese won an Emmy Award for his guest role on the comedy series “Cheers,” and received another Emmy nomination for a guest stint on “3rd Rock From the Sun."

Less well known is the fact that John Cleese co-wrote (with Robin Skynner) two best-selling books on psychology, Families and How to Survive Them, and Life and How to Survive It. He also co-founded Video Arts in 1972, which became the largest producer of management and sales training films outside the United States. Video Arts was sold in 1991.

John started the Secret Policeman’s Ball concerts for Amnesty International and has continued to do a lot of charity work, much of it, like The Human Face (2001), for the BBC.

In his twilight years, he passes his time writing film scripts, making speeches to business audiences, doing seminars on creativity, teaching at Cornell and constructing a virtual reality (his website, www.thejohncleese.com)

The Dallas VideoFest and the Video Association of Dallas announced the first Ernie Kovacs Award at the 1997 festival. Comedian Joel Hodgson of Mystery Science 3000 was the first recipient and subsequent honorees have included Terry Gilliam of Monty Python; Robert Smigel, writer/performer of Saturday Night Live and Late Night with Conan O’Brien; Paul “Pee-wee Herman” Reubens; Martin Mull; Mike Judge; George Schlatter, creator of Rowan & Martin’s Laugh-In; Harry Shearer, Spinal Tap and The Simpsons; Michael Nesmith; in 2017, Dave Foley and Kevin McDonald of The Kids in the Hall; and in 2018, Amy Sedaris, the first woman to receive the Ernie Kovacs Award.

2-Day Event Listing:
Over the years, VideoFest has only shown short snippets of Ernie Kovacs’ work. This year being the Kovacs’ Centennial, Dallas VideoFest hosts will have a full evening of Ernie Kovacs TV work the night before the Award Event.

Celebrate the Centennial of the birth of offbeat comedy genius, Ernie Kovacs, with this hilarious retrospective of his greatest live gags on early TV in the 1950s along with his career highlights, which have inspired the likes of Pee-wee Herman, Kids in the Hall, Amy Sedaris, Mike Nesmith, and Monty Python. Hosted by Dallas VideoFest's artistic director: Bart Weiss, Ernie Kovacs archivist: Ben Model, and Josh Mills, the son of Ernie’s wife, Edie Adams