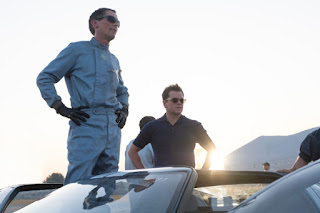 Ford v Ferrari kicks into the high gear!
Auto racing films can be tricky task when film directors needed much commitment on crafting racing films that takes people out for a drive out in the open field to practice and to testify every track and ability to get though tougher times and reaching their goal to the finish line. As much as the brand recognition of two rivalry automotive companies, Ford and Ferrari, will probably get their racing fans’ butts into the theater seats, it isn’t just about racing but it’s all about love and friendship when it comes to racing ambition to save and improve the company. James Mangold, known for helming 2017’s Logan, calls the front seat of the car as the director of the film.

Ford v Ferrari is focused almost exclusively on the exploits of automotive designer Carroll Shelby (Matt Damon) and race car driver Ken Miles (Christian Bale), enlisted by the Ford Motor Company to build and drive a car in order to beat Ferrari in the ultimate enduring race of the seasons. Though, the biggest problem for both characters is the ambition of winning is just got wacky and they both realized what their main singular goal is and how that can define them.

Matt Damon not only plays the as the protagonist but also a supportive character to Christian Bale’s Ken Miles character as Damon’s character really put the pace and effort on showing and demonstrating the Miles character on how the race car turns out as the test driver in hopes of winning of the 24 Hours of Le Mans race in France with countless of incremental improvement over the race car. Their chemistry between Damon and Bale really set the boundaries on putting their team to craft and develop a prestigious Ford GT40, a new racing car that will have a higher chance of beating Ferrari out in the racing competition.

On the other side of the film, actor Jon Bernthal (The Punisher) is present as Vice-President of Ford Motor Company who sides with Damon and Tracy Letts who portrayed as Henry Ford II, the CEO of Ford, in this film. There are other characters that are involved in the film: Remo Girone as Enzo Ferrari, the founder of the Italian automobile racing team Scuderia Ferrari, Ray McKinnon as Phil Remington, actress Caitriona Balfe as Mile’s wife, and Noah Jupe as Mile’s son. The film also includes Josh Lucas as one of Ford executives with a secretive source of antagonism that will outpour the duo’s victory of winning and beating Ferrari out.

The duo’s chances of winning and beating Ferrari becomes the main climax of the film as Shelby and Miles took much time and commitment on building the best, most fastest car ever, with Miles doing more test drives into place with lots of changes and improvements over the car with Josh Lucas’s Beebe character threaten to discourage Miles put his glory, self-ambition, and self-aggrandize out of place. Perhaps, it is the most difficult task to test the ability with humorous laughs, shocking twists, and lack of redundant feels that can easily make the audience tinkle their legs and feet. Though, the story is a bit too drawn out for the purposes of historical accuracy between this film and real life racing shows in France being televised in America. Director James Mangold is just having fun filming the racing scenes and be curious on the racing histories and on the cast and crew during the racing games.

Over the top, Ford v Ferrari is a great movie, it has all the car parts anyone would ever need to make this movie as great as any auto racing films, It’s an well-oiled machine for both families and race car fans out there that will rock your seats front and back. The direction and script-writings are just as charming and with Bale and Damon putting their character developments as supportive duos into action. Just to let the readers that this movie is really long within two and the half hours from vehicle manufacturing to auto-racing extravaganza. You will love this to see who crosses the finish line first.