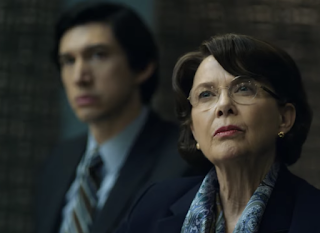 Writer/director Scott Z. Burns returns to cinemas with the political thriller “The Report.” It’s a stronger film than his previous effort – the recently released “The Laundromat” (although Burns only wrote the screenplay for that one, Steven Soderbergh was the director). While “The Report” is, as a whole, stronger, it’s still not a wholly satisfying movie.

As the film opens, Daniel Jones (Adam Driver) is meeting with a lawyer, Cyrus Clifford (Corey Stoll). Jones has obviously done something that has had negative legal ramifications, leading to this meeting. The mood is grim as Jones begins to tell Clifford his story. It is revealed that Jones came to Washington D.C. as an idealistic young man, someone who wanted to make his contribution to the world by working in the background. He wound up employed by the Senate, a staffer working under Senator Dianne Feinstein (Annette Bening), who tasked him with investigating the CIA’s Detention and Interrogation Program that was created following 9/11.

The film bounces around in time as Jones works to uncover the facts about the CIA’s program. Burns gives the past a seedy, sickly yellowish tint, filming these segments that dig into the CIA’s secrets with a hand-held, home movie look. These choices highlight the grimy nature of the subject matter – the CIA’s inhumane treatment of their prisoners. Much of the footage is uncomfortable to watch, featuring government employees torturing their prisoners in hopes of finding answers although the techniques had already been proven ineffective well before these events took place in the early 2000s. Conversely, the “present-day” segments, meaning the scenes that focus on Jones as he and his team work on the report, have a more polished, cleaned up appearance. The framing is stable and images take on a more clinical, sterile look, mirroring the windowless office in which Jones and his teamwork.

Adam Driver plays the part well, showcasing a man who grows continually obsessed with his work as he uncovers more of the story. Unfortunately, Burns’ script doesn’t allow viewers any insight into Jones’ personal life. To us, he’s just a man obsessed with work. It’s stated that he lost a relationship while working on the project yet the partner is never shown. The other actors don’t fare as well. More often than not, the acting is poor as the cast overacts their parts. Burns might be a good writer but he doesn’t seem to have a handle on directing his performers yet.

One of the problems with this film is that it is covering so much detail that it feels like it is glossing over almost everything, condensing a 500-page summary of a nearly 7000-page report into a two-hour movie. We don’t need all the grim details but this probably would have worked better as a miniseries. Two hours barely gives Burns enough time to convey what’s happening over this 10 plus year period, let alone establishing any of the characters. Still, there’s enough here to hold the audiences’ attention. Burns keeps the story compelling enough to maintain his grip on the viewer. It just never totally clicks into place. This one is being distributed by Amazon. Soon, it will be on Prime for streaming. I suggest waiting to watch it then.
(Review by Bret Oswald)