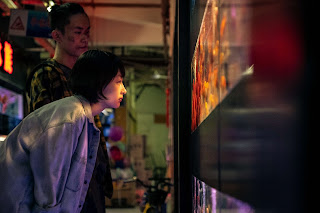 Taking final exams in China seems to be a terrifying experience. Over 10 million young people endlessly study to pass the National College Entrance Exam or gaokao that will ultimately set your future as to the university you will be able to attend, and secure your career. On top of that stress young people are subjected to bullying by their peers. Director Derek Tsang’s film was recently pulled from distribution by the Chinese government with no explanation. The government relented in October and the film has been declared one of the best films of the year earning over $80 million dollars.

High school senior Chen Nian (Zhou Dongyu) is a loner whose only friend commits suicide by jumping from the balcony at school. While other students stare and take pictures, Nian covers her up with her jacket. Soon Nian becomes the object of bullying from other students. A group of mean girls ask her to join their study group as Nian is rated high in her class. When she refuses, she becomes their target. Nian's mother travels around trying to earn money. In fact many parents are usually absent from their children's lives as they are usually working somewhere else, or too busy to pay attention to what's going on. Students terrorize each other creating a situation where teachers and police have no good way to handle it. Nian tries to help Xiao Bei (Jackson Yee, singer and dancer from a wildly successful boy band in China TFboys), a drop out and low rent hood, who is getting badly beaten. To thank her he offers to protect her for payment. But she asks how can he protect her when he can't even protect himself. Nian does need protection as she had reported the mean girls earlier and got them suspended. The mean girls are set on revenge.

Despite Nian's passive nature, she is strongly aimed at passing her tests. It's the only way she can escape her life and save her mother who is being targeted for selling face masks that causes rashes. Bei also has been on his own since he's been 13 selling stolen phone parts to make a living. Bei follows behind Nian while she goes to school. But one day he is picked up for rape and spends the night at the police station. Unprotected Nian is brutally bullied. Her hair is cut off, her clothes torn from her body. Nian keeps Bei from going out to pay them back.

There is a sweet love story from these two unlikely teens. They watch out for each other and hope for better days when Nian is able to go to college in Bejing. They know its a long shot for them to go together, but they enjoy the dream. That is until one of the mean girls ends up dead. The police detective who has been handling Nian's bullying complaints think there is something going on between the two. He asks why she didn't report the bullying from before and realizing there wasn't much he could have done to have helped her.

The movie begins and ends with the seriousness of bullying in schools. It's an issue that seems to be wildly out of control in Chinese society. The message stresses how the government is taking steps to launch a policy to address bullying in primary and middle schools. Then there is the societal pressures of the national tests that students must take to succeed in their world that cause many children to commit suicide. The tests are so important that the mean girls may have been suspended from school, but they were still allowed to take the tests.
(Review by reesa)

Posted by Dallas Movie Screenings at 9:28 AM