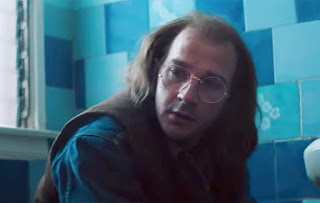 “Honey Boy,” written by and starring Shia LaBeouf, is a semi-autographical work. In it, LaBeouf takes a fictionalized look at his life. While revealing and personal for those who know nothing of LaBeouf’s troubles, the film comes across like a therapy exercise, created to help the actor deal with unresolved issues. The film, directed by Alma Har’el, cuts between a twenty-something actor, Otis (Lucas Hedges), and his twelve-year-old self (Noah Jupe), exploring how his time living with his father (LaBeouf) in a junky, run-down motel during the shooting of a television show as a child influenced his present, in which he is going through rehab.

Presentation is everything with movies like this because, by this point, this is a story we’ve seen many times before – behind the glitzy, glamorous face of a young Hollywood hot-shot lies a troubled past. As presented here, “Honey Boy” feels more like a bottle of dried up honey. It’s like an old container of that sticky, sweet goo – hard, crusty, and unpalatable. It’s revealing but never seems like it’s even starting to attempt to scratch beneath the surface of things. This is more like someone drily relating some of their life events to people who probably have little to no context, unless they closely follow celebrity gossip.

Shia LaBeouf’s performance as James is the highlight of the movie. Though he’s a supporting character, viewers will realize that James, based off LaBeouf’s own father, is the most important character in the story. He’s a former rodeo clown and a felon, paid to be Otis’ chaperone but doing a poor job. It’s obvious to us that James is a bad father; the movie offers no expansion beyond that. Still, this is a fairly strong performance from LaBeouf, who must have gotten some therapeutic relief from playing the role. LaBeouf’s strongest recent performance is in this year’s “The Peanut Butter Falcon,” I’d recommend that movie over this one.

“Honey Boy” isn’t an unbearable experience but it’s close. The biggest issue with Har’el’s movie is its lack of momentum. There’s a lot going on in both timelines but neither ever seems like it’s progressing towards anything. Worst of all, there’s no emotional impact, something you’d expect from a film that’s autobiographical. We witness events that have caused young adult Otis to wind up in rehab, but there’s no insight offered beyond the superficial level. Har’el and LaBeouf only show the beginning and end result, completely ignoring the progression to that end.

“Honey Boy” winds up feeling aimless. It listlessly moves through events before abruptly concluding. The characters never form any meaningful connection with the audience. It’s like Har’el and LaBeouf expect the audience to connect with the material solely because of its autobiographical nature. To boil this all down to a brief statement – I wasn’t into this movie at all.
(Review by Bret Oswald)