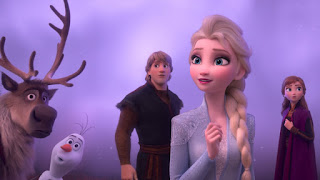 Frozen 2 becomes another Frosty-Filled adventure for fans and children.

Fans have been waiting for this much-anticipated Disney animated sequel, Frozen 2. The original cast and crew are back to join another Frozen adventure like last year’s Ralph Breaks the Internet after the first Frozen film have garnered $1.2 billion at the box office and was the highest grossing-animated film of all time. Directors Chris Buck and Jennifer Lee also return to helm the sequel as well. The studio originally wanted Frozen to be an original film, but decides to make a franchise out of it by crafting short film sequel (Frozen Fever), a Christmas special (Olaf’s Frozen Adventure), and this. For that matter, animated Disney princess movies don’t get theatrical sequels – they end, by definition, with a happily ever after.

The film focuses on Elsa (voiced by Idina Menzel) who is back on the throne in Arendelle with Anna (voiced by Kristen Bell) by her side, but when Elsa keeps hearing this haunting melody wafting in from up north. Elsa must embark on the journey out of Arendelle, along with her sister Anna, Kristoff (voiced by Jonathan Groff), Olaf the snowman (voiced by Josh Gad), and Sven to find answers about the source of her own mysterious powers.

The story is truly inspiring on the themes of humanity and nature when it comes to snowy adventures and the conflicts the characters (and the directors themselves) put as one of the main dynamics on the film. It’s similar like you’re watching a film that has snowy road-trips settings you watch on winter times, especially Christmas. The themes of the film also compared to Hayao Miyazaki’s films (including 1984’s Nausicaä of the Valley of the Wind), characterized by the recurrence of themes such as humanity's relationship with nature, having young women or young girl as a strong protagonist, and the wholesomeness of natural and traditional patterns of living for characters (both protagonists and antagonists). Winter, autumn, or any season kind of puts the definition on nature and humanity for the Elsa character.

For the original cast, actors Idina Menzel, Kristen Bell, Jonathan Groff, and Josh Gad done a remarkable job on their character roles as well as having fun with the comedy routines and drama they put like in the first film. Not only the original actors, but newcomers Sterling K. Brown (who voiced Lieutenant Destin Mattias in the film), Evan Rachel Wood, Alfred Molina, Martha Plimpton, Jason Ritter, Rachel Matthews, and Jeremy Sisto also appeared in the film.

The animation of the film is photo-realistically remarkable as the directors, producers, and animators have worked on every scene on computer and hand to make the snowy and watery scenes make more live-action(ish) like a real lake or river, not to mention the action from Anna, Elsa, and Olaf. The main key for this film is not just ordinary CGI for the film and the characters, but also requires strong usage of photorealistic computer animation on some parts and levels like Jon Favreau’s The Jungle Book and 2019’s The Lion King. Not just animation, but the music itself coming from the composer Christophe Beck and songwriters Robert Lopez and Kristen Anderson-Lopez is just as stunning like the original film, with several musical numbers like "Into the Unknown" which meant to be as catchy, yet successful as “Let It Go” and Olaf’s "When I Am Older" song which brings the comedic trauma back like his “In Summer” song.

Frozen 2 is a great movie, if not as painstakingly anticipating as it looks like the original film, Avengers: Endgame, the remake of The Lion King, and Pixar’s Toy Story 4. The directors, the cast, and the animators done a great job of keeping the pace and the track of the film and its musical numbers to fit the storytelling without a fuss. I certainly have no complaints on this film, but you can have the option of seeing this film, but if not, you can stick with the original film or go back and watch Endgame or Toy Story 4 if you like to get more enchantment. For my easiest choice, this film is must-see for Frozen fans. Just to let the readers know a month after this film, Disney will release the upcoming Star Wars: The Rise of Skywalker in theaters.

One last thing, this is the final Disney production with the involvement of John Lasseter.