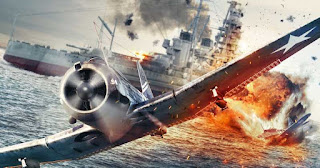 At first glance, one would think Roland Emmerich the director of “Independence Day” and “The Day After Tomorrow” was changing his mind about helming big budget disaster movies, but with “Midway” he executes a decent film that actually captivates in certain spots.

I was actually surprised by the immersive quality that went into this production, since one feels like they are on the bombing mission when a character bombs his target.

Going back through his resume, Emmerich has tried at times to divert from his resume, 2008’s “Anonymous” was his attempt to shift gears and do something off the beaten path that just blew up in his face. So readers know, I gave it a C when I originally reviewed it.

With his new release of “Midway,” Emmerich tries to weave as much as he can with his tableau to make audiences grasp the levity of anything and everything that happened here. He even manages to squeeze in a mini nod to Pearl Harbor, by just using that as a mere segue into what happens here.

Patrick Wilson is Edwin Layton, who thinks outside the box and plans ahead for what operations the army is involved with. Woody Harrelson is Admiral Chester Nimitz a tough-as-nails soldier who values other people’s opinions when it is warranted.

Another major part of the story is Ed Skrein’s Lieutenant Richard “Dick” Best, a rugged fighter pilot who knows the ins and outs of everything involved with his plane, as well as his desire to return home to his family with Mandy Moore’s Annie Best.

What Emmerich has done with this film is that it is engaging as well as memorable. He never lets the film slip into a period of doldrums or sheer boredom. He keeps the pacing smooth and steadfast and never overdramatizes the events that unfold.

This one actually improves on what director Jack Smight did with the 1976 incarnation of the famed battle. Fast forward from that time to advancements in modern day technology, Emmerich has crafted a tale with a movie dynamic that is more fluid and faster paced and more altogether riveting.

Also worthy of mention in “Midway” is the always cool and reliable Dennis Quaid as William “Bull” Halsey. His screen time, however is limited to just about two or three scenes. Also commendable is Aaron Eckhart as Jimmy Dolittle and he suffers the same fate as Quaid in that his presence is not required for the whole film.

Also nifty was Luke Evans as soldier Wade McClusky, since he is usually in other big budget adaptations such as Paul W.S. Anderson’s retelling of “The Three Musketeers” (2011) as well as the little seen “Dracula Untold” in 2014. With his American accent as Wade is spot on, since most Americans don’t really know about his British background.

“Midway” is not a great war movie, but it at least takes advantage of making this big screen ensemble worthwhile for a theatre experience.